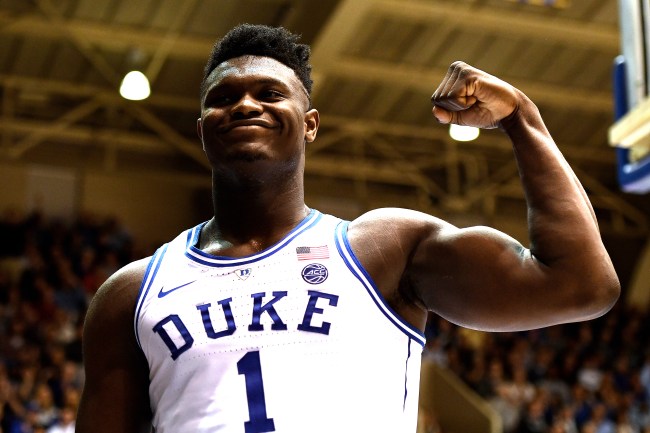 Zion Williamson’s a man who needs no introduction, as the stud freshman for the Duke Blue Devils has proven to be the most-hyped college hoops player of the past 25 years. Given his freakish athleticism — where he’s making impossible dunks look routine, he’s denting basketballs with his fingers and he’s doing things like smacking his head against the backboard while blocking opponents — it’s no wonder that people are totally cool traveling far and wide to see Zion play. After all, as the projected No. 1 overall pick in this year’s NBA Draft, college hoops fans are limited as to seeing Williamson play in college before he’s in the pros. When you add in that Duke’s the No. 1 team in the nation, too, well, tickets to Blue Devils games are expensive AF.

For those who might be thinking that they may want to catch Zion Williamson in person, well, you better have deep pockets, because it’s going to cost you. And, when it comes to watching the greatest college basketball rivalry — where Duke hosts the No. 8-ranked North Carolina Tar Heels this Wednesday night — online ticket prices are at an all-time high because people want a glimpse of Zion.

So, who is getting me tickets for tomorrow's game?! 😆 pic.twitter.com/f3FXjh9V0y

It’s not just this game that college hoops fans are dropping big-time cash to see Zion Williamson, though, with Sporting News reporting that, per Vivid Seats, all sales traffic to Duke basketball’s ticket page is up 82 percent for this season, with Blue Devils fans willing to travel a media distance of 469 miles to watch their squad play. Guys, that means people are willing to drive nearly eight hours to watch a two-hour game with the ungodly talented Zion.

One final though on the ridiculous ticket prices for tomorrow’s Duke-UNC game, by the way. According to another secondary online ticket site, SeatGeek, tickets to the Super generally average costs between $2,500 and $3,000, with the prices fluctuating depending in the matchup and when fans purchase tickets. The only time Super Bowl tickets averaged more? Super Bowl XLIX between the Seattle Seahawks and New England Patriots, where a single ticket averaged $4,314.

Considering the Duke-UNC game is a paltry regular season game and Zion Williamson’s first against his school’s hated rival, it’s scary to think how much ticket prices for future Blue Devils games will climb as we get into March, when the ACC Tournament and NCAA Tournament come into play. Anyone willing top drop the price of a car to see Williamson and the Dukies play?