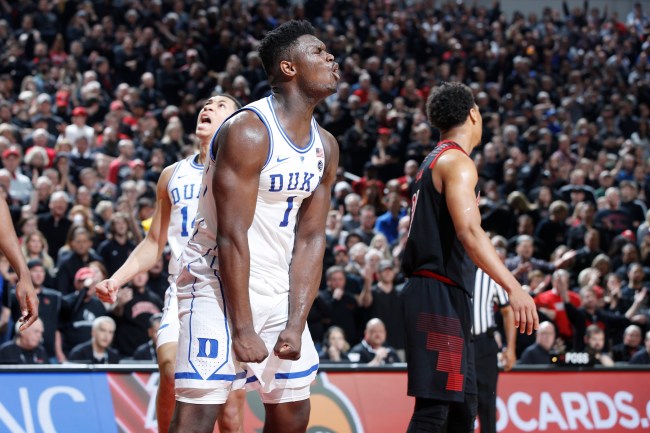 Zion Williamson is a man amongst boys out there on the basketball court, with the Duke Blue Devils freshman yacking on poor souls at the rim with a monster dunk, or sending one into the crowd by swatting their shot. As the most-hyped college basketball player in about 20 years, Zion’s doing things that most of us have never seen before from a teenager his size. He’s literally got LeBron James’ freakish athleticism with a body frame that resembles a defensive lineman’s more than a forward on a basketball court.

To suggest that Zion Williamson is superhuman might sound insane, but, c’mon, have you seen some of the things he does? He’s got power, speed, hops and strength that the average man just doesn’t have — and he put it on display again during last night’s game against the Louisville Cardinals.

That’s because, thanks to a picture tweeted out from Bleacher Report’s Tyler Conway, Zion can be seen denting a basketball with just his fingers as he tries to wrestle possession away from a Louisville player. Take a look at the insanity below.

Assuming that ball is fully inflated, the fact that Zion Williamson has more strength in two of his fingers than most of us have in our entire hands is scary. I mean, what in the hell does this dude eat, because that’s some super strength. Seriously, go grab a fully inflatable basketball and try denting it by squeezing it with two hands, chances are you’re not even close to doing what Zion’s doing here. The guy’s a freak.

Since something like this isn’t, well, normal, once the picture hit Twitter, people couldn’t hold back their feelings, generally showing lots of disbelief at what their eyes were looking at. Here’s what some people were saying about the man, the myth and the legend, Zion Williamson.

At this point, Zion could do a Monstars-style dunk and I’d be like, “yeah that checks out.” pic.twitter.com/sVJIymXs4s

Somebody come take a look at this pic.twitter.com/wVSFfYyhq0

Confirmed. He is the hulk

He reminds me of another two ton man monster who could palm a medicine ball… pic.twitter.com/bLlGO07r1V

Is Zion a Demi god

Zion Williamson is like nothing any of us have ever seen before, and, just when you think he’s gone full mental by doing something insane — like hitting his head on the backboard while trying to block someone — he outdoes himself by proving that he’s got plenty of other tricks up his sleeve. Whoever lands this dude in this year’s NBA Draft is going to be lucky AF.