Zion Williamson Is Such A Beast That It’s Like Getting Hit By A Jeep When Taking A Charge On Him, Per Study 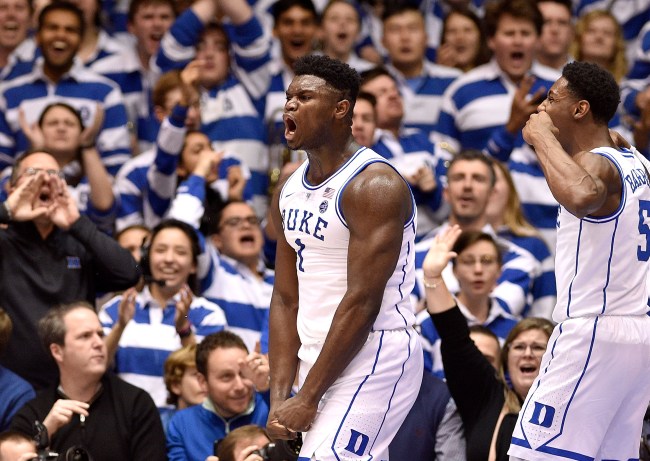 Zion Williamson of the Duke men’s hoops team is a bad, bad man. In fact, he’s so bad that, just this week while visiting my buddy in L.A., I admitted that he’s one of only four players in college or pro hoops that actually gets be excited to watch — with the others being LeBron James, Giannis Antetokounmpo and Luka Doncic — which is testament to Williamson’s rare talents that are put on display anytime he steps onto a basketball court.

Since I’ve (somehow) become the beat guy for all things Zion Williamson here at BroBible, I figured I’d dig up an interesting stat that proves just how much of a freak the 6’7″, 290-pound really is. While Zion might be pushing three bills, the dude can still jump out of a gym and sprint by people. He’s like a lion, in a way, who has a rare combination of power, speed and pure domination.

And, because Zion Williamson is a tank, some people wanted to see what it might be like to get in his way. That’s why The Wall Street Journal writers Ben Cohen and Andrew Beaton reached out to University of Lynchburg physicist Eric Goff, to see exactly how much force the Duke freshman has when he’s going to the basket. Basically, they wanted to know what it’s like to take a charge from the kid when he’s got a full head of steam. Their findings? Well, get the f*ck out of the way, basically.

Per WSJ, via UPROXX:

At the request of The Wall Street Journal, University of Lynchburg physicist Eric Goff reviewed grainy clips of Williamson charges to solve Gaminde’s mystery and quantify the basketball equivalent of getting hit by a bus. He calculated the maximum force of impact during one Williamson charge to be 300 pounds—the equivalent of the average force during a similar, head-on collision with a Jeep traveling 10 miles per hour.

Yep, no thanks, I’d like to keep my body intact.

One guy who experienced the impact of a Zion Williamson charge was Syracuse big man, Marek Dolezaj, who showed a lot of guts — or insanity — by trying to slide into the freakish freshman’s way during a game last week. The result was pretty predictable, with Dolezaj getting absolutely trucked. Take a look below.

Hahahaha Homie got knocked out after taking a charge from Zion Williamson 😂😂 He a Truck 🚛 pic.twitter.com/P9gP03XtZl

So, what was it really like to take a charge from Zion? Here’s what Marek Dolezaj told Syracuse.com.

“Oh, I just wanted to stop him,” Dolezaj said later, after the Orange stunned No. 1 Duke 95-91 at Cameron Indoor Stadium. “And you know, like, he went through me. He ran into me.”

“I fall on the bone on the back. You know, your lower back, the two bones on the left side and the right side. I fell on the left side bone and it hurt like twice more and went straight to my leg,” Dolezaj said. “Yep, it’s bruised. And it will hurt (Tuesday).”

In other words, don’t try this at home, kids.

Whether Zion Williamson’s treating opponents like rag dolls, hitting his head on the backboard while making blocks or is being hyped as the second-coming of Michael Jordan, this dude is showing that he’s a force that can’t be slowed down. And that’s scary as hell for anyone with the task of even trying.