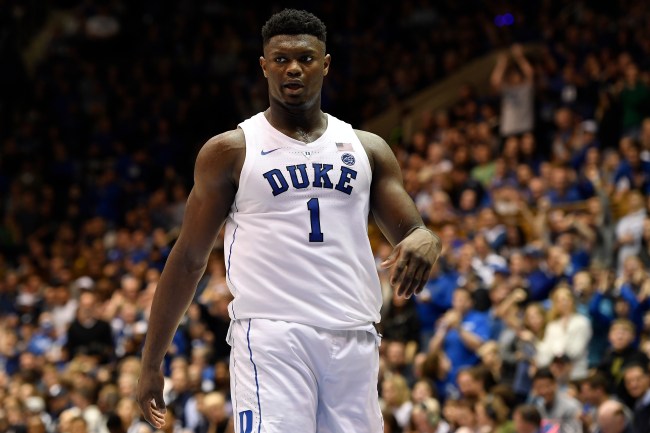 Zion Williamson is, for all intents and purposes, the most exciting basketball player on the planet right now. Sure, people can argue that a guy like LeBron James is thanks to his freakishly athletic plays, or Kevin Durant for his ability to glide effortlessly like a gazelle at nearly seven-feet tall, or Steph Curry is for having zero regard for all things human by pulling up (and knocking down) treys from everywhere on the planet. But, for my money, it’s Zion.

That’s because the 6’7″ Duke freshman is as must-see TV as there is in the sport right now, replacing all the aforementioned guys, and any others, by making people swear they were there in person to see Zion Williamson do that. Whatever that actually is — a nasty dunk, a 30-point explosion or a swat on an opposing player that looked like it was my 34-year-old-self blocking a middle schooler. And it’s that last example that has people talking tonight, because Williamson did the extraordinary on a block during Duke’s game against Princeton tonight.

Take a look at this rejection Zion had below, and notice how his head — yeah, his damn head — hit the backboard while mid-flight.

Zion almost got taken out 😮 pic.twitter.com/YmnutueVzk

Obviously, this isn’t something more humans can do, let alone have seen before, so the most recent “holy sh*t” play from Zion Williamson was one that sent Twitter into a whole different level. Here are some of the things people were tweeting.

this dude really the same species as me. Crazy

Zion Williamson has ruined all non-Zion college basketball games for me. He’s the most entertaining collegiate athlete I’ve ever seen.

Zion Williamson is something I haven’t seen before

Nothing to see here.

Just Zion Williamson hitting his head on the backboard after an emphatic block 🚫pic.twitter.com/YGV1MHaOpU

Zion Williamson hit his head on the backboard

Me the only hopeful Knicks fan pic.twitter.com/dOTYo3d8ur

Zion Williamson literally flew to get this block. pic.twitter.com/Y0XWXbF1Wy

Zion is now blocking shots as his head hits the backboard. He may clear the backboard at some point. pic.twitter.com/4aQq6exDzf

Zion Williamson is exciting as hell. He’s one of those rare athletes right now that I’d actually want to pay a healthy amount of money to see up close and personal. He’s a budding superstar on one of the best teams in college basketball. And, oh yeah, he’s expected to earn a cool $1 billion for his hoops ability. With a personality as electric as his play, it’s hard not to like what this guy does every single time he’s on the court.