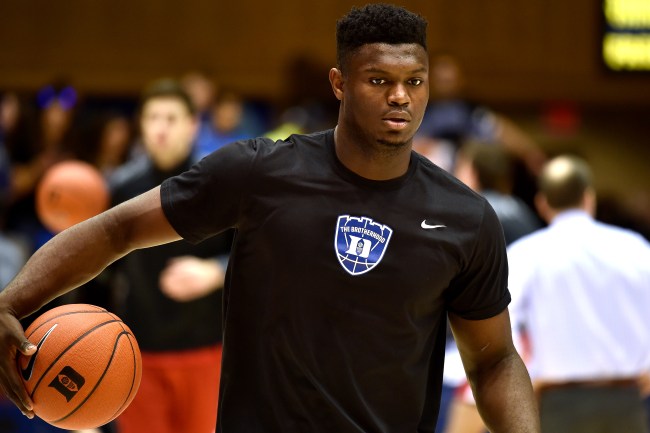 Zion Williamson is the most polarizing college hoops player since, arguably, Shaquille O’Neal some 25 years ago. Sure, there have been other primetime players who came in with hype, stayed for a year of college and then went into the NBA after being a one-and-done, but the Duke forward is even more electric than any of those guys; and has a personality that’s a little bit Shaq-like, if you will. For that reason, expectations for the 6’7″ Zion Williamson are insane.

Currently averaging 20.4 points, 9.0 boards, 2.1 steals, and 2.0 blocks while shooting 66.1 percent from the field for the Duke Blue Devils, Zion Williamson is more than just stats, though. Thanks to his insane athleticism and freakish abilities, even when he’s having a (rare) off-night, in a flash, he could take a steal for a breakaway dunk that sends the Cameron Crazies into full sicko mode. Here are just a few examples.

With all the attention Zion Williamson’s getting on the basketball court, it’s only natural for experts to project what might come for the 18-year-old, who’s expected to be the No. 1 overall pick in next spring’s NBA Draft. Just how much do scouts and analysts love Willamson? Enough to think that he’ll easily surpass $1 billion in career earnings.

“The combination of his personality, unique physical ability, his basketball ability, the fact that he’s already built himself a brand and the fact that he’s at Duke and is going to be on TV every single game this season, it just adds up. You don’t have to be a marketing genius to realize that this kid is going to make a lot of money off the court.”

The praise for Zion Williamson didn’t stop there, though, because a longtime sports marketing expert at Baker Street Advertising, Bob Dorfman, seemed to agree with Fraschilla, saying he could foresee a similar situation for the Duke star.

“Over the course of his career, it’s certainly possible if everything falls perfectly. We know he’s got the game. His head seems screwed on right. He’s poised on camera, articulate, and intelligent. He has the potential for LeBron-esque domination on the court; if he has LeBron-esque ambition in marketing endeavors, $1 billion is within reach.”

It’s interesting that Dorfman brought up LeBron James’ name, because, unlike James, Zion Williamson wasn’t able to go straight from high school to the NBA, as the rules prohibited him from even exploring the possibility. For that reason, it’s a huge risk for Williamson to suit up for the Dukies every single game, opening up the possibility of an injury that could derail all of the expectations and earning power he’s expected to have. Fair or not, those are the rules, so, hopefully, nothing happens to the kid and he’s capable of reaching the heights so many thing he will.

Seeing as how it’s completely out of Zion Williamson’s control to do anything but continue clowning pedestrian college kids at the moment — other than sitting out and preparing for the NBA Draft, which is a common practice in college football — I’m just going to sit back and enjoy it. The dude truly is a once-in-a-generation talent, and college hoops is better with him playing; as long as it doesn’t ruin what his future has in store.