Is Zion Williamson As Hyped As Michael Jordan Was In College? One ACC Coach Thinks So 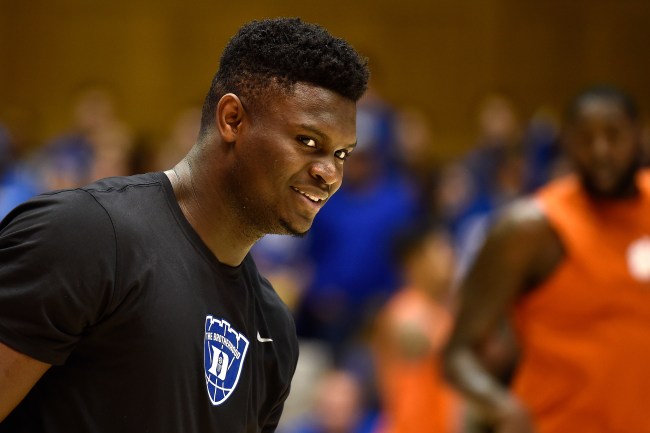 Zion Williamson has been the talk of college basketball ever since he won last year’s McDonald’s All-American Slam Dunk Contest, with hoops fans and everyone on social media wanting to see the high-flier who committed to Duke University. Now that Zion’s 15 games into his freshman season with the Blue Devils, it’s hard to go a day without hearing the kid’s name on sports networks, with him making the remarkable look routine on a nightly basis.

It’s that type of talent that has Zion Williamson joining some elite company, with some basketball experts saying he could potentially earn over a billion dollars in his career should everything go right for him, which, as of now, isn’t something any NBA player has actually done. It’s also got Zion’s name being mentioned with all-time greats like Shaquille O’Neal, LeBron James and (gulp) even Michael Jordan.

And, when it comes to Jordan, at least one current ACC head coach, Florida State’s Leonard Hamilton, thinks that Zion Williamson is the biggest phenom from the conference since MJ wore North Carolina’s baby blue back in the early ’80s. Here’s what Hamilton had to tell Warchant.com, via Bleacher Report.

That’s some serious praise for a kid whose only played 14 games in college basketball. But, with many believing that Zion Williamson’s definitely going to be the No. 1 overall pick in the NBA in this year’s draft, and has the capability to become a once-in-a-generation talent, that’s the ceiling for this kid.

And, according to Bleacher Report’s Twitter account, Hamilton’s comparison to Jordan isn’t that far-fetched. Take a look at the stats from both players during their collegiate days — remember the sample size, though, as Jordan’s stats are from this two years in Chapel Hill, and Zion Williamson’s has been 14 games.

FSU coach Leonard Hamilton on Zion: “The most phenomenal talent in the ACC since Michael Jordan." (via @Warchant)

As for all those people who aren’t fully on the Zion Williamson train yet, the kid’s coming off a performance against Wake Forest that saw him drop 30 points, grab 10 rebounds, dish out 5 assists and even snatch 4 steals, so the kid is a human box score. Oh, and there’s this little nugget that Bleacher Report’s Twitter wanted to remind us all — Zion actually has more dunks this season than all of Duke’s opponents put together.

Zion is dunking everything 💪 pic.twitter.com/ni128NbtdV

Guys, Zion Williamson may not be the next Michael Jordan, which isn’t what Leonard Hamilton said anyway. Hell, he may not be the next Shaq or LeBron. But after seeing what he can dominate on a basketball court, he’s earned every comparison and accolade to this point, because he’s a freak of nature like we’ve never seen before.