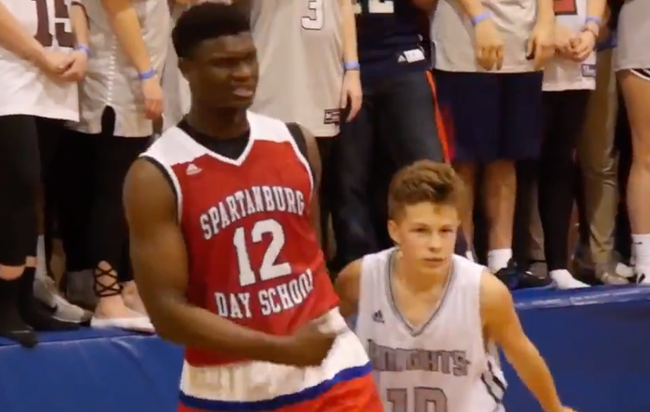 If you played sports in high school, there’s a very good chance you faced off against an opponent that had at least one athlete who was basically a human cheat code in a contest that made you question your decision to even start playing the game in the first place.

Those are the kind of situations where you already know how things are going to end before the action gets underway, and the only way to “win” is to do everything you can to make it end as soon as possible in an attempt to walk off the court with at least a few shreds of dignity remaining.

However, if you were ever lucky enough to find yourself on a particularly dominant squad, you likely encountered one of those people who refuse to be intimidated by the reality of the situation; the kind of kid who will slap the floor on defense and yell “Let’s goooooooo!” after making an and-1 even though his team is down 17 points in the first half.

That’s the situation Zion Williamson encountered as a high schooler during his junior season at Spartanburg Day Academy in South Carolina, where he found himself facing off against Oakbrook Prep, a team that was home to one of the most delusionally fearless competitors you’ll ever encounter: an eight-grader named Bryson Bishop.

During a game in 2017, the 5’6″ point guard was somehow tasked with guarding one of the top prospects in the country at the time, which produced a truly incredible clip featuring an incredibly intense Bishop clapping it up while a baffled Williamson—who had over a foot and at least 100 pounds on his defender—tries to figure out what the hell is happening.

Friend just sent me this clip of Zion hooping in high school and it's exactly the type of content we all need right now pic.twitter.com/j4bojegLLQ

A couple of years ago, Bishop spoke with The Undefeated to reveal what was going through his head when his coach told him his assignment, saying he was sort of terrified and resorted to clapping to amp himself up.

Now, we’ve finally gotten Williamson’s side of the story courtesy of JJ Redick, who brought up the clip while talking with the Pelicans big man on The Old Man and The Three podcast.

It appears he hasn’t forgotten about this classic moment, as he remembered Bishop’s name and provided some more details concerning the specifics of the scenario while reflecting on what he was thinking at the time:

“We’re up 30 at this point. We come out of a timeout and he starts walking over to me. I was like, ‘No way. You’re not about to do this.’ He comes over and he starts clapping. I looked to the right at our principal and track-and-field coach and I was like, ‘Are they serious?’

He fouled me, but what people don’t know is I got a lot of respect for him doing that. His teammates were so out of it. He was just trying to give them energy, and for him to be the one to come over there and do that, I got nothing but respect for him.

But when it was happening in the moment, I was like, ‘No way. Don’t disrespect me like that.’”