Zion Williamson Reportedly Wants Out Of New Orleans, And He Needs To Be On One Of These Three Teams Next Season 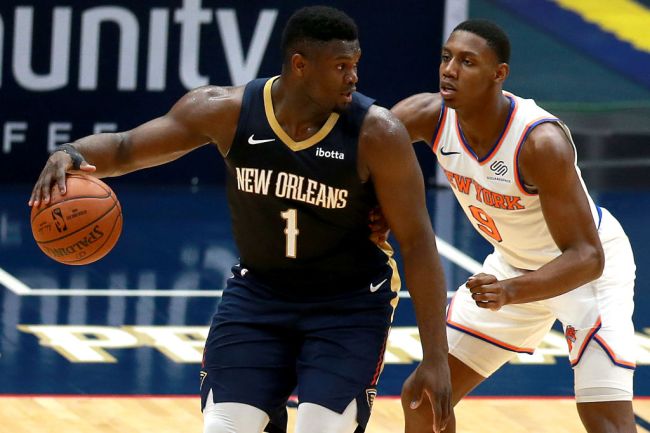 First reported by The Athletic, members of Williamson’s family are upset at the organization; they reportedly do not think that the front office has done a good enough job of putting together the “right pieces” to give him success.

Where do you want Zion to be next year? #zion #basketball #nba #fyp #foryou #foryoupage #dunk #slamdunk #zionwilliamson #pelicans #neworleans

♬ Swear By It – Clutch

The Pelicans certainly made efforts to build a strong team for the former No. 1 Overall pick. After trading Davis in 2019— the same year they drafted Williamson— they added Brandon Ingram and Lonzo Ball. The roster is built around Williamson, but he might be on his way out.

So who should make a push for Williamson?

The Knicks were the first team many fans thought of when The Athletic reported the unhappiness in Williamson’s family. And it makes sense why. Throughout his two years in the league, Williamson has spoken highly of the Knicks. He loves playing in the “Mecca of basketball” and even went as far to say that, “outside of New Orleans, I think this might be my favorite place to play.” Additionally, Willamson’s former Duke teammate RJ Barrett is on the Knicks.

Everyone knows Damian Lillard needs some help. Yes, he has CJ McCollum. However, Zion can add a new depth to their offense. Lillard and McCollum are mostly shooters, whereas Zion does his work in the paint. Together, they would be a nightmare for defenses.

Yes, the Mavs are dealing with their own front office issues right now. But, imagine the firepower between Dončić and Williamson. Similar to the Trailblazers, Dončić will space the floor for Williamson. And probably through some absurd lobs. Additionally, there are reportedly chemistry issues with fellow star Kristaps Porzingis. This trade would give both players a fresh start on new teams with new coaches.

The list goes on with teams that will likely be calling the Pelicans. Of course, the Hawks and the Grizzlies are both teams with young, star point-guards that Williamson can help take the load off of. As the past two days have shown, the NBA is a wild association. Do not be surprised if there is a blockbuster trader this summer.