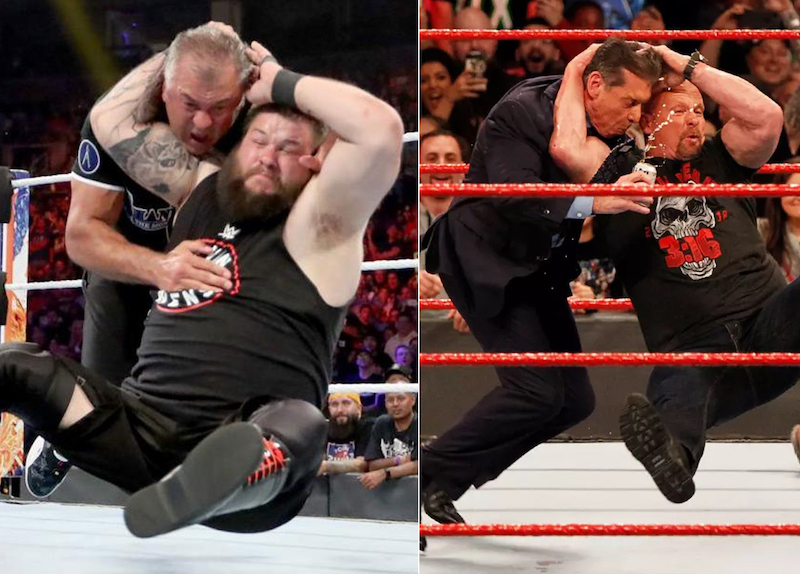 For a professional wrestler, finding a finishing move isn’t always the easiest task. Most finishers fit with a wrestler’s in-ring persona.

Jake Roberts and Randy Orton are both tall, agile, and serpent-like performers in the ring, so the quick strike of a DDT and RKO fit their personality.

Yokozuna was a massive, mountain of flesh, so dropping those 500 pounds down on an opponent’s chest makes absolute sense.

For the first four years of Kevin Owens‘ run in NXT and WWE, the former World Champion used the pop-up powerbomb as his finisher.

Eventually, Owens noticed other performers using the move in matches, but not as a finish, which slightly takes away from the believability of Owens using the move to beat an opponent.

Owens realized a change was necessary.

“I felt like everybody was doing a powerbomb of some sort, just short of doing pop-up powerbomb,” Owens told Fightful.

“I’m pretty sure I saw some guys do it too. That’s a whole other thing of people take from other people and when we’re all on the same show and same team, that’s a whole other issue. I was seeing all these people doing powerbombs and I want to stand out with something different.”

The former NXT and Universal Champion toyed with the idea of using “Stone Cold” Steve Austin’s “Stunner” as far back as 2016 but felt it only right to get Austin’s permission to use the move as his finisher.

“I asked Austin if I could do it, first and foremost.

At the same time, I wanted to do something that people can be excited about. I got this feeling of ‘maybe I can use the Stunner.’

It’s been used throughout the years by a lot of people, but it wasn’t a finishing move anymore.

I thought, ‘Maybe if I get advice from Stone Cold himself, I can figure out how to make it a finishing move again.'”

Owens sought the advice, and blessing, of Steve Austin to use the stunner.

“I went to him, asked him if I was okay with him using it and he was very happy to say yes.

He was wondering when someone would come ask him.

He gave me the green light, I took it through the proper channels and it was deemed that it wasn’t the right time for it, but eventually, it became the right time and here we are now.”

Steve Austin’s initial reaction seems surprising since the move is synonymous with the Stone Cold character, but Austin’s admiration for Owens as a worker might have something to do with his willingness to give his blessing on taking the move.

Another reason for Austin being open to Owens using the Stunner is because, as Austin himself has admitted in interviews, he didn’t invent the Stunner and wasn’t the first performer to use the move.

“My finish was being used by someone else before I really made it famous, or trademarked it, so to speak,” Austin told Sports Illustrated back in 2019.

Owens told Fightful that people still aren’t happy about him using the move but those people can “take their opinions elsewhere.”

As far as the name goes, Owens said he’ll never change the name of the move and will continue to pay homage to the WWE Hall of Famer by performing it to the best of his ability.