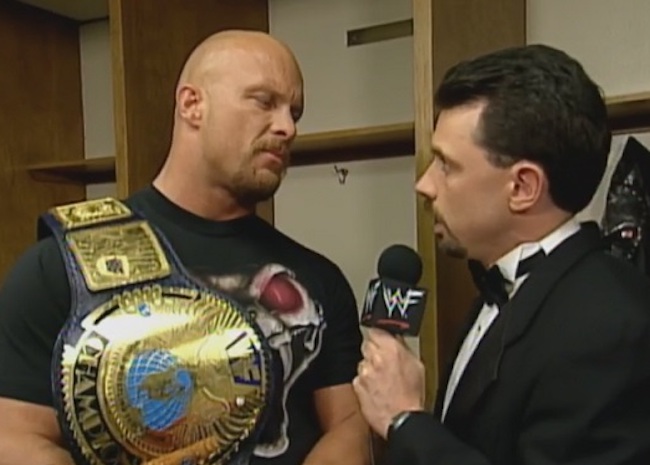 All of those championships add up to a ton of belts around Austin’s waist at various times but for most of Austin’s WWE run, the Texas Rattlesnake rarely wore the championship around his actual waist.

Austin discussed his aversion to wearing gold on an episode of “The Steve Austin Show” after an eagle-eyed fan pointed out this fact.

The fan emailed and asked why Stone Cold never actually wore the belt. He either held the title in this hands or slung the championship over his shoulder.

“You know, ‘Stone Cold’ Steven Austin came down to the ring to whoop a man’s ass and he sent out that message with a BMF walk.

Y’all know what the BMF walk stands for.

And I just thought it looked cool dragging that thing in my hand or putting it on my shoulder and that’s the way I conducted my business.

And if you got in my way I would wear your ass out with that damn belt.

Austin also had a good laugh about the “Million Dollar Belt” given to him by Ted DiBiase when he debuted as “The Ringmaster” and explained the belt was a giant hunk of crap even though it looked expensive.

I’ll tell you what I just never thought wearing them was cool.

But that belt that me and Ted DiBiase used to wear, when Vince brought me in as “The Ringmaster” and I came in as a champion, he sold me on the idea of that belt, it was a real hunk of crap.

I mean it looked pretty and had all the little rhinestones on it but it would bust so easy if you just barely dropped it from like a foot and put it on the mat. It would start breaking off in little bitty pieces and those little dollar signs to go flying everywhere.

Maybe “The Million Dollar Man” was on a budget when buying the belt but that would mean everyone truly does have a price.

[via The Steve Austin Show]