Vince McMahon And Former XFL Commish Are Fighting Over A Phone Password And $23.8M Is Hanging In The Balance 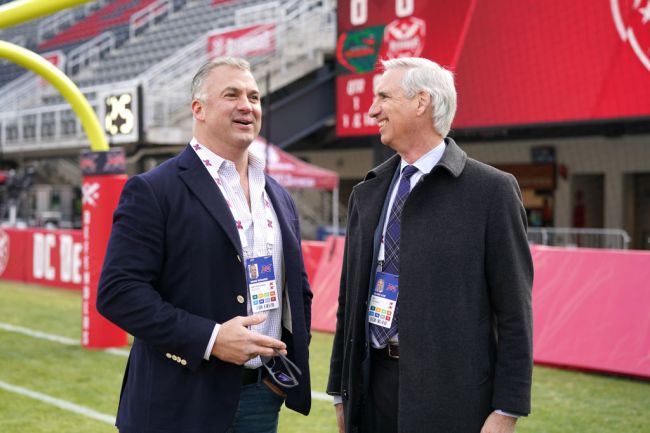 The fight between WWE Chairman and former XFL owner Vince McMahon and the man hired to run the league, Oliver Luck, should get settled in a Hell In A Cell match. It would be much cheaper.

McMahon and Luck, the former commissioner of the league now owned by a group headed by Dwayne Johnson, are in a legal battle over Luck being terminated from his position back in May.

McMahon cited three specific reasons for Luck’s termination – Luck left the XFL’s Connecticut HQ for his home in Indiana on March 13 and “disengage[d] from the XFL’s operations,” he signed a player with a questionable background (which is against league rules), and he allegedly used his league-issued iPhone for personal matters.

Luck – father of former NFL quarterback Andrew Luck – is suing for the balance of his $35 million contract.

Daniel Kaplan of TheAthletic.com is reporting that the ongoing lawsuit is now focused on access to the password to Luck’s company phone.

Courting filings on behalf of McMahon’s lawyers, obtained by The Atlantic, states:

“The full contents of [the phone] are relevant to showing that Luck was properly terminated for cause under his Employment Contract because he grossly neglected his duties after March 13, 2020 — when Luck effectively abandoned his responsibilities as XFL Commissioner and CEO and returned home to Indiana despite the existential threat to the league posed by the COVID-19 pandemic,” McMahon’s lawyers wrote in court filings, via Kaplan.

Examination of the data on the iPhone will show Luck’s activities during this critical time period when he was not in the office and demonstrate that he failed to ‘devote substantially all of his business time to the performance of his duties to the XFL’ as required by his Employment Contract.”

Pro Football Talk breaks down what’s going on in a language the rest of us will be able to understand.

“McMahon decided after the pandemic began to scrap the XFL and to sell the carcass, and he wanted to avoid paying the balance of Luck’s contract.

Thus, McMahon needed some basis for avoiding the obligation. His lawyers came up with an argument that Luck could be fired for cause, throwing everything possible at the wall in the hope of finding something that would constitute cause.

A hearing will be held later this week to decide if Luck must provide the password to the phone.

[The Atlantic via PFT]