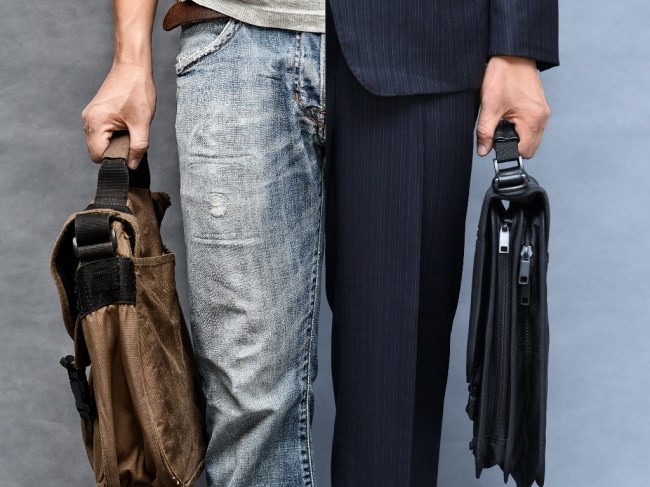 I’ve never had to wear a suit to work in my life. I’ve suited up for various parties, and I wore a tuxedo on the red carpet at the Cannes Film Festival. But I’ve never worked in a field which required me to wear a suit and necktie every day. Does this make me smarter than my childhood friends who went to law school and now wear suits to the office day every day? Actually, it might.

A recent study published in the journal Neuroradiology found that men who dress comfortably may be smarter and have higher brain function than men who wear suits and ties each day because of the constricted blood flow:

Scientists at the University Hospital Schleswig-Holstein in Germany scanned the brains of 30 healthy young men, according to the medical news site Auntminnie.com.
For the study, half of the men were instructed to wear comfy open-collared shirts, and the other half was told to wear Windsor-knotted ties, tightened to the point of slight discomfort, according to New Scientist Magazine.
The study found that guys wearing ties had 7.5 percent less blood flow. (via NYPost)

This makes sense. Decreased blood flow to the brain is obviously going to lead to problems. But I think this ignores the vast majority of men who wear suits and neckties every day who don’t tie their necktie so tight it’s uncomfortable. You buy shirts that fit properly and tie your necktie accordingly. You’re not out there trying to strangle yourself from 8am-6pm every day. This study also only involved 30 guys which is an incredibly small number, and way too tiny for a study to be considered robust. In order for these findings to be validated, they’ll need to run this with a HUGE sample size.

For more on this study, you can visit the NYPost and/or NewScientist.