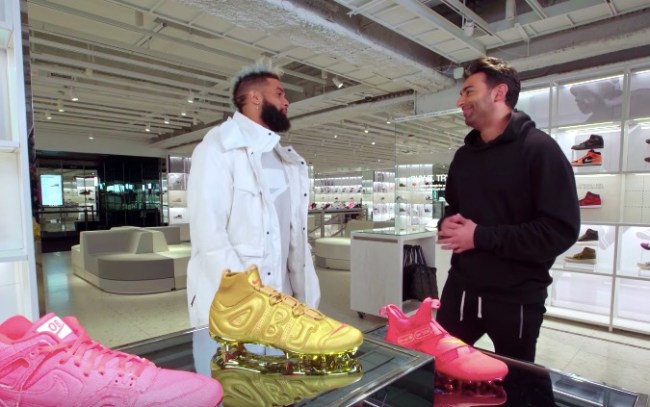 Nike recently opened a 68,000-square-foot flagship store on 5th Avenue in the heart of Manhattan. It’s going to be a first-of-its-kind store for Nike that will be equal parts commercial space as well as a space for the sneaker customization, 1-on-1 shoe consultations, and a space that showcases how the shoes are designed and manufactured.

Odell Beckham Jr. is one of Nike’s highest-profile athletes in America. The New York Giants wide receiver signed the most lucrative shoe deal of any player in NFL history. It’s said to have been a 5-year deal worth more than $29 million, and it could be worth as much as $48 million in eight years with incentives. That’s more than his NFL contract with the Giants that pays out $10.4 million over four years.

Obviously, Nike sees something special in Odell Beckham Jr. as an athlete and a designer. He seems to have a keen eye for what works best in shoes and cleats and he took some time out of his schedule to tour the new Nike flagship store in NYC with Joe La Puma from Complex.

OBJ talks about how he can pretty much get his hands on any Nike sneaker he wants, and how his friends, in turn, have access to any Nike sneaker on the planet. It seems like Nike just hooks him up with the shoes anytime he asks which makes the end of this video kind of funny when the Nike employee tells him his total is $1500 and they play like he’s getting charged when he clearly isn’t.

To learn more about the new Nike flagship store on 5th Avenue you can click here to check out a good article on FastCompany. For more on Odell Beckham Jr’s sneaker collection you can click here for a look inside of his closet full of shoes.