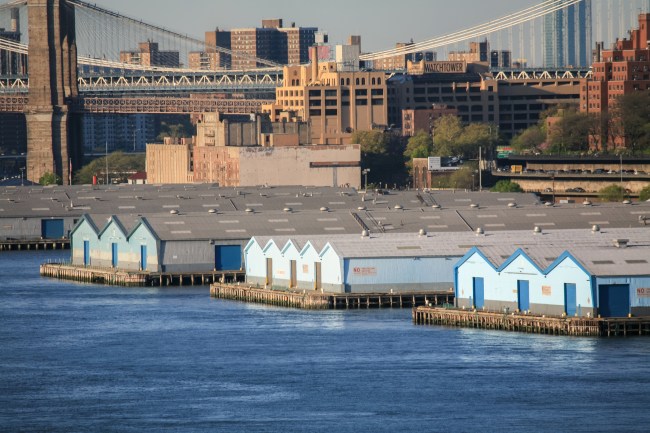 Decades ago, Former NYPD detective and drug cop Greg O’Connell betrayed his Queens roots and started investing in real estate. He chose Red Hook as the neighborhood to start buying up properties which was an absolute ghost town back in the 1960s when he made his first purchase.

When asked about Red Hook in the mid-1960s, Greg O’Connell told Bloomberg that “You could drive down Van Brunt Street on a Sunday on a bike with no clothes on and it wouldn’t make any difference.”

It’s estimated that his investments are now worth *at least* $400 million.

“Not in my wildest dreams would I ever believe that there was such a thing as a million-dollar condo, but they sell ’em” in Red Hook, said O’Connell, who paid $4,000 in 1976 for his three-story home on Warren Street, which is now worth more than $1.2 million. (via)

His story is pretty humble but equally wild, and it also had a lot to do with what led him to his real estate fortune.

When O’Connell was a boy, his dad would sometimes bring him to work. On one occasion, they passed a drunken man lying on the sidewalk holding a bottle of Thunderbird wine. O’Connell’s dad turned to him and said, “Remember to treat the judge on the stand and the poor unfortunate on the street the same way.”
“I had very good examples,” O’Connell said. “It was valuable to give back to your community in any way you could, so I guess that has been with me.”

After graduating from State University of New York, Geneseo in 1964, O’Connell became a substitute teacher during the day and a cop at night. He started on the tactical patrol force, working in high crime areas, mostly in Manhattan. Some of his time was spent patrolling the Upper West Side, where an urban renewal project sparked his interest in real estate.
“I began to look at the brownstones and the details that were there and the old world craftsmanship,” he said. “They were beautiful buildings, each one a little different.” (via)

Red Hook has absolutely exploded in recent years and the popularity of the waterfront neighborhood is only increasing. For a while, the only thing dragging NYC transplants to Red Hook was IKEA and lobster rolls but that’s all changed in recent years as the city’s waterfront has blossomed.

Red Hook is now designated as an ‘opportunity zone’ which means it’s a thriving area for developers with projects popping up left and right. It’s also going to drive up the prices of everything and O’Connell knows this. He talks about this in his Bloomberg interview which you can read by clicking any of those links.

Now that neighborhood’s blowing up, he’s moved on to other investment opportunities despite being mostly retired and having his son run his company:

O’Connell said he’s no longer buying properties in Red Hook because he can’t afford the development costs. Now “basically retired,” he splits his time between Brooklyn and a home in upstate New York, where he’s also bought dozens of properties near Geneseo to help other communities “take back their Main Street.”
One of his sons, Gregory, now runs the O’Connell Organization from a repurposed warehouse on Red Hook’s waterfront. As he passes along the business, O’Connell said he hopes his son will have his same sense of duty to the community. (via)

Am I crazy or does this type of investor/investment just not exist anymore? Sure, you can still buy cheap land in America but definitely not near thriving cities. I guess you could go down the line and look at the cheapest cities in America and purchase land there in hopes that they’ll grow in the future but you aren’t doing that with the expectation of preserving ‘community’ like he’s doing with Geneseo.

I don’t know what else to say other than this is awesome for him. Flipping those investments into a fortune that will last for generations if managed properly. It’s incredible.

Check out his full interview at that link.