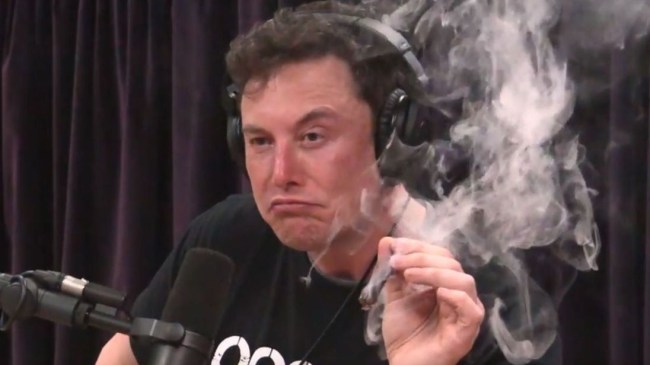 Everyone loves a dumb 420 weed-smoking joke right? It turns out that the Securities and Exchange Commission is not huge fans of a dad joke-esque 420 pun. On Thursday, the SEC sued Elon Musk for making “false and misleading” statements to Tesla investors. On Friday, shares of Tesla plummeted after the potentially disastrous news broke.

The reason for the SEC lawsuit is a tweet from Elon Musk on August 7th that discussed taking Tesla private at the price of… $420. A reference to the preferred marijuana time of 4:20.

Musk issued a statement on the Tesla website explaining how he got to the price of $420. Stating that the perspective price per share was based on a “20% premium over the stock price following our Q2 earnings call (which had already increased by 16%).”

However, court documents reportedly said the calculations actually resulted in a price of $419, but Musk later revealed that he added an extra dollar to make the price $420 “because he had recently learned about the number’s significance in marijuana culture and thought his girlfriend ‘would find it funny, which admittedly is not a great reason to pick a price.'”

Tesla’s stock rose nearly 9 percent on the day Musk tweeted the potential private price. Tesla’s stock hit a year-high of $379.59, but have declined substantially since then, punctuated by his appearance on Joe Rogan’s podcast where he smoked weed.

Imagine having the power to declare the price of your company’s stock and then deciding on a price to impress your girlfriend with a dumb 420 pun? The Securities and Exchange Commission didn’t find it funny and sued Musk.

Elon Musk backed out of a deal with the SEC to settle allegations of fraud over his comments about taking Tesla private, reportedly saying that by settling he would be failing to be true to himself. https://t.co/v2NoifNDcA pic.twitter.com/OZCOorVJ6l

Now, Tesla investors are not finding the 420 joke or the SEC lawsuit uproarious because the electric carmaker could lose nearly $20 billion.

“If Elon Musk resigns or is not the CEO, Tesla is a fundamentally different company that is less attractive to us."

The possibility that Elon Musk could lose his role as Tesla CEO may have cost shareholders up to $20 billion pic.twitter.com/YALEzue6b8

Tesla shares plummeted as much as 12.8% on Friday morning and at the time of publication, the automaker’s stock was down about 11%. The lawsuit could remove Musk temporarily or permanently and finance experts have argued on both sides that Musk’s removal could hurt or help the debt-ridden carmaker’s stock since he is the face of Tesla. The SEC litigation could take weeks and even months.

“In truth and in fact, Musk had not even discussed, much less confirmed, key deal terms, including price, with any potential funding source,” the SEC said in its complaint. Stephanie Avakian, co-director of the SEC’s enforcement division, said that the agency will hold people accountable despite “celebrity status or reputation as a technological innovator.”

Musk responded with his own statement: “This unjustified action by the SEC leaves me deeply saddened and disappointed. I have always taken action in the best interests of truth, transparency and investors. Integrity is the most important value in my life and the facts will show I never compromised this in any way.”

Shareholders have also filed lawsuits alleging that Musk purposely posted the private price in an effort to manipulate the stock price. While there are some cries for Musk to be removed as the CEO of Tesla, the company’s board of directors said they “are fully confident in Elon, his integrity, and his leadership of the company. Our focus remains on the continued ramp of Model 3 production and delivering for our customers, shareholders and employees,” the statement said.

Musk decided against taking Tesla private less than three weeks after floating the idea on Twitter. If you’re ever a CEO of a massively popular corporation, learn from Elon’s mistake and don’t tweet out 420 jokes wrapped in important financial business of your company.