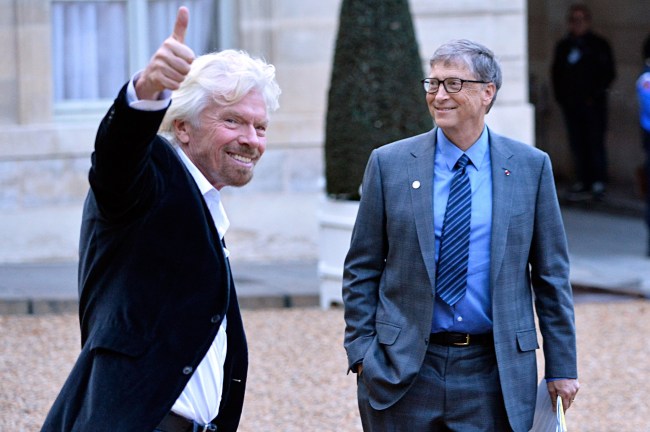 Successful people like Richard Branson and Bill Gates might own companies, influence others, be worth billions of dollars and continue to make a huge impact on the world, but, when they actually have some free time, it turns out they’ve got some hobbies that help keep them sharp. I’m not saying that if you should pick these up, boom, all of a sudden you’ll become rich and successful, but, hey, I’m not saying that won’t happen.

As someone who’s a hardcore runner, getting about an hour to myself to blast some music and sing the lyrics in my own head is enough to clear my mind and keep me focused on other things. That might sound weird, but, hey, it works. For some of the most successful people in the world, they find some peace in other hobbies, and, according to The Ladders, here are a few of the ones they like to do.

Virgin. But when he’s not flying to tropical islands or doing something else to get his thrills, he’s simply playing a game of chess.

According to The Ladders piece, Branson once wrote on Virgin’s blog this about the reason he loves chess.

“I think chess may just be the best game in the world,” he writes on Virgin’s blog. “It combines the greatest aspects of many different sports — tactics, planning, bravery, and risk-taking — plus you can have a cup of tea and often a stimulating conversation while you play!”

Chess is one of those hobbies that requires skill and awareness, even if it’s at a slower pace, so it makes sense that Branson gets fulfilled from it.

I can honestly say that I’ve never played Bridge in my life, but, hey, one of the world’s most successful people, and richest, Bill Gates thinks it’s a good way to pass time. According to The Ladders piece:

Gates has a few hobbies he considers to be “old-fashioned,” and the billionaire tells Reddit he is an “avid bridge player.”

While all of us are out here playing a more thrilling card game like Black Jack and Poker, Bill Gates is playing Bridge, go figure.

It’s a random instrument to even pick up, but for Warren Buffett, it does the trick. According to a website called HearNebraska, Buffett picked up playing the ukulele as a teenager to serenade his future wife, Susan, and he’s been playing it ever since.

Warren bided his time. He’d drop by the Thompson residence, and he struck up a friendship with Susan’s father Bill. Bill played the mandolin, and so Warren would often bring his ukulele along on visits. As Susan left to go out with friends or on a date with her boyfriend, Warren would spend the evening strumming tunes with her father.

Since then, one of the world’s most successful people, Buffett, routinely plays his ukulele at charity events and has done so on CNN’s “Piers Morgan Live” and NBC’s “Today Show.”

To see some of the other hobbies of some of the world’s most successful people, head on over to The Ladders. Hey, finding a good hobby to pass time is always better than sitting around swiping on dating apps in your spare time, right?