Tilman Fertitta, Self-Made Billionaire And Owner Of The Rockets, Gives His Advice For Success 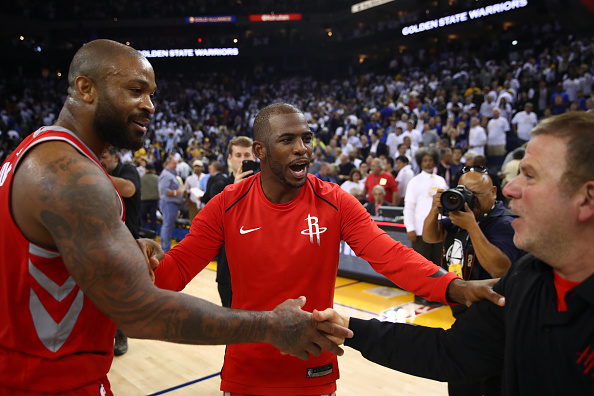 OAKLAND, CA - OCTOBER 17: PJ Tucker #4, Chris Paul #3 and team owner Tilman Fertitta of the Houston Rockets celebrate after defeating the Golden State Warriors 122-121 in their NBA game at ORACLE Arena on October 17, 2017 in Oakland, California. NOTE TO USER: User expressly acknowledges and agrees that, by downloading and or using this photograph, User is consenting to the terms and conditions of the Getty Images License Agreement. (Photo by Ezra Shaw/Getty Images)

You may not know of self-made billionaire Tilman Fertitta, but you’ve probably eaten at one of his restaurants or been to his casinos. Fertitta is the chairman, CEO, and sole owner of Landry’s, Inc., one of the largest restaurant, hospitality, and gaming corporations in the country. Landry’s Inc. includes popular restaurants in 35 states as well as internationally such as Bubba Gump Shrimp Company, Dos Caminos, Joe’s Crab Shack, Mastro’s Restaurants, McCormick & Schmick’s, Morton’s The Steakhouse, and Rainforest Cafe. Forbes named Fertitta the “World’s Richest Restaurateur.”

Tilman, who has a net worth of $3.6 billion, also owns Golden Nugget Hotel and Casinos in Las Vegas, Atlantic City, and Laughlin, Nevada. Last September, the Texas native purchased the Houston Rockets for a record-breaking $2.2 billion. With all of his unbelievable and widespread success and fortunes, any advice from Tilman Fertitta should definitely be taken seriously.

Fertitta, who also stars in CNBC’s reality show, Billion Dollar Buyer, gives some of his advice on how he became so incredibly successful. “If people said, ‘Tilman, why are you so successful?'” Fertitta stated. “I’d say, ‘You know why? Because I never shot for the stars.'” Fertitta continued to explain the secrets to his success. “It’s happened over a long period of time. It didn’t happen overnight.” Fertitta said it took patience and years of planning for his business achievements to come to fruition. “I always had goals but they were goals that I could reach,” Tilman told CNBC.

The billionaire revealed that he doesn’t write down his goals, but “he always has an idea of what he wants to accomplish and lays out a general time frame of when he wants to fulfill that goal.” “I’m not talking about little goals. I’m talking about big goals,” Fertitta said. “Everybody in life should always strive [to figure out], ‘How am I going to get from point A to point B?'” The last piece of advice that Fertitta shared was that, “you’ve gotta be disciplined about your goals, just always remember that.” There you have it. You’ve got priceless advice from a self-made billionaire so that you can make 2018 your year to shine.