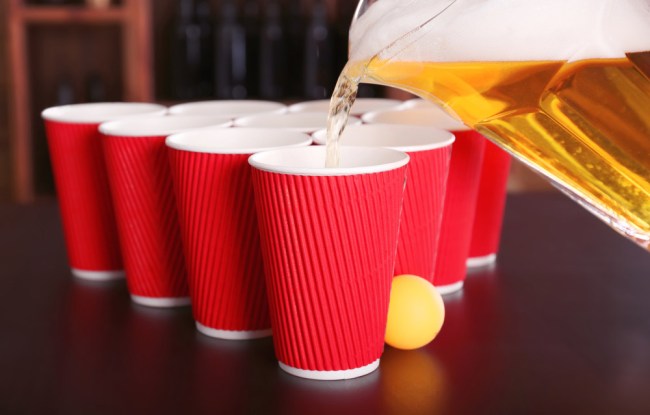 A very interesting and unique study by CollegeStats.org used social media to determine which colleges in America party the hardest.

It’s a good thing too, because as we all know, while a school being respected for academics is nice, you don’t want to spend ALL your time studying, right?

So how did they determine the most popular drinking games and the best party schools? Glad you asked because here comes the interesting part.

I think that pretty much covers it, no?

With that out of the way, now it’s time to see if your school made the list and which drinking games are the most popular these days on college campuses.

First up, the Most Popular College Drinking Games… 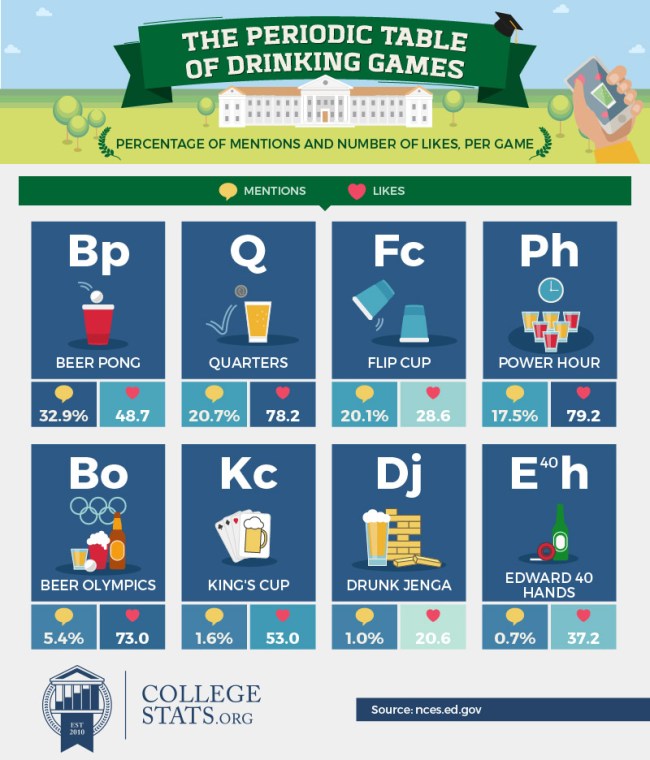 What a shock, huh? Beer pong comes in at numero uno.

While Beer Pong has the most mentions on Instagram, Power Hour takes the cake for most likes – with an average of 79.2 likes per post compared to just 48.7 likes per post on Beer Pong mentions.

Next up, America’s Booziest College Cities… 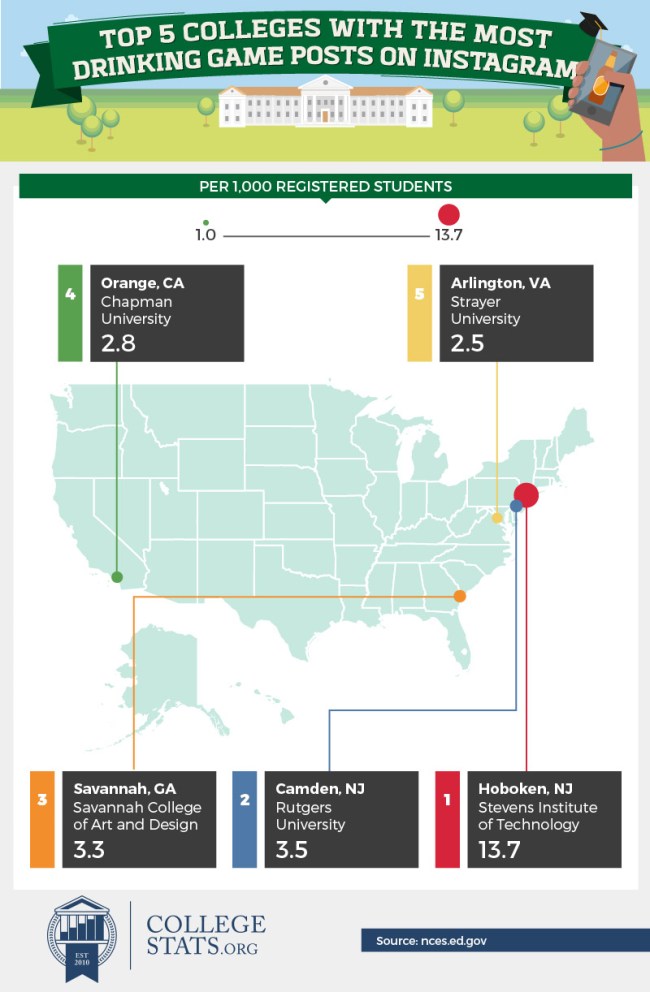 Take a bow, Stevens Institute of Technology, you win the top prize for partying.

And while Rutgers slots in at number two, the rest of the list tells us not to sleep on those smaller schools when it comes to getting lit.

Now we move on to College Cities’ Favorite Drinking Games… 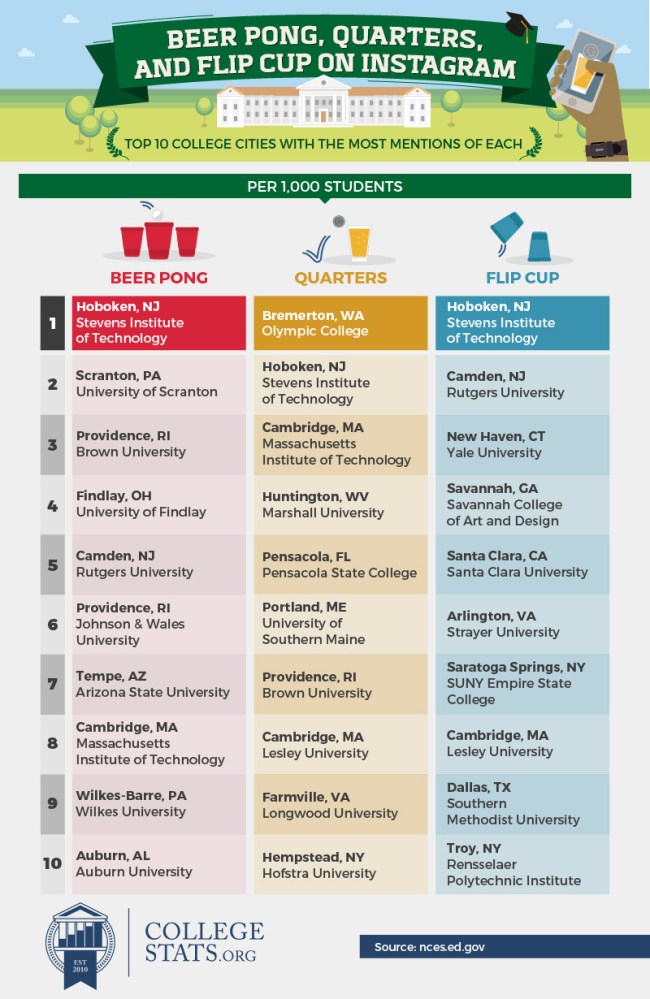 Once again, Stevens Institute of Technology cannot be denied as they love them some Beer Pong and Flip Cup. However, if you are a fan of playing Quarters then Olympic College in Bremerton, Washington is the place to be.

And last, but not least, Drinking Games By State… 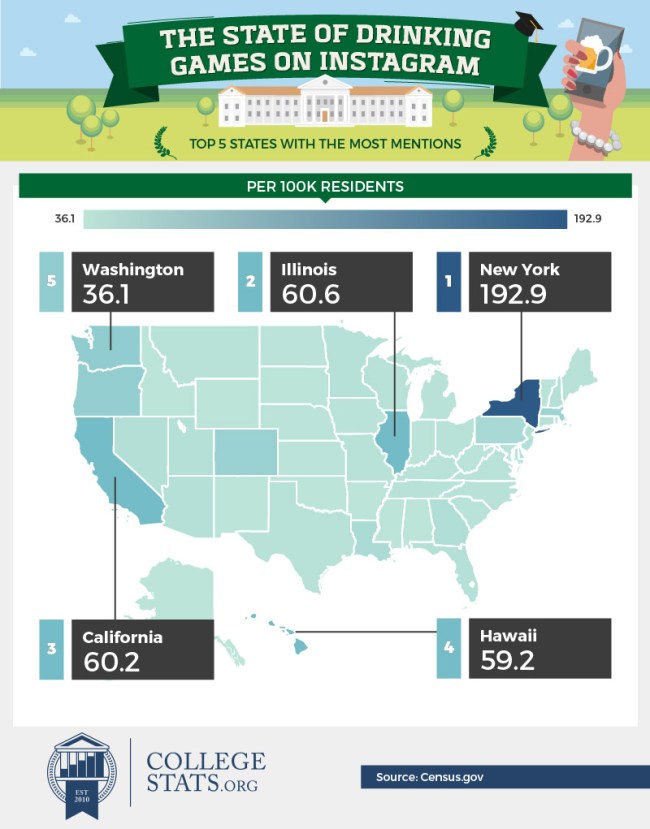 Interestingly, these states don’t rank highest for overall alcohol consumption in the nation. However, they do havea more liberal perspective overall, so perhaps they are also more liberal and open when it comes to alcohol.

So there you go. Now, if you haven’t chosen a college yet, you know where the fun is at. And if you have already graduated, well, maybe it’s time to visit one of the schools you didn’t attend sometime down the road.