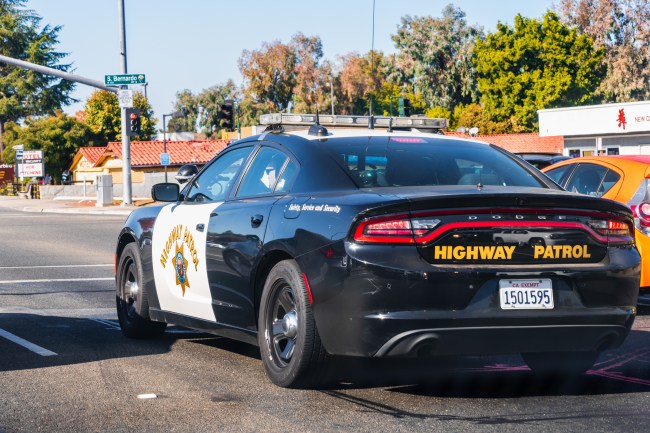 It’s been easy to forget that it’s ‘High-Speed Car Chase Season’ out in California right now because so many people have been stuck at home and the roads are much emptier than they’d usually be. But this season happens like clockwork. Every year as the temperatures begin to rise in So-Cal and the region experiences its first few warm days there are people who try to outrun police on the road.

There’s something about the heat that drives Angelino drivers crazy, I guess, only in this instance it’s actually three dudes (in three SUVs) who had drive cross-country from New York to Los Angeles who ended up being apprehended by the police.

Throughout the car chase, they dumped cardboard boxes containing $915,000 in cash while trying to evade the police. It culminated with arrests and no cash. This sounds like it was handled extremely poorly by the drivers. Three SUVs and all of them ended up getting busted?

The chase began shortly before 6:30 p.m. when a CHP officer tried to stop one of three black SUVs that appeared to be traveling together on Interstate 5 south of Los Banos in Merced County, authorities said.

During the chase, one SUV straddled lanes to block the patrol car, which maneuvered around it and kept chasing the first car, a Chevrolet Suburban.

The Suburban stopped on the shoulder of the road at one point and the driver got out, dumped two cardboard boxes and then took off again before finally stopping for good, the CHP said.

The driver of the Suburban and a second SUV that was stopped in traffic were both taken into custody but the SUV that had tried to block the officer escaped, authorities said.

The cardboard boxes contained $915,000 in cash, and a police dog alerted to the odor of drugs on the money, authorities said.

I have some questions. If you are driving across the country to buy a million dollar’s worth of weed to theoretically sell it back East, wouldn’t you want to make that drive in an electric car so you aren’t spending $$$$ on gas from coast to coast and back? Also, is there really that much of a weed shortage on the East Coast already (no, there’s not) that you have to drive all the way to California and not stop at other states along the way? This just seems odd to me all around. I guess it doesn’t specifically say they drove from New York to California to buy a ton of week but this report claims ‘the suspects were traveling to Northern California to purchase marijuana’.

According to Officer.com, the suspects are now facing felony charges. I simply cannot think of a worse time in the past 50+ years to be thrown in jail with everything that’s going on in the world right now.

I’m not saying there’s ever a good time to go to prison I just think this particular moment in history is an absolutely idiotic time to get yourself arrested. For more on this story, you can click here to visit the Post.