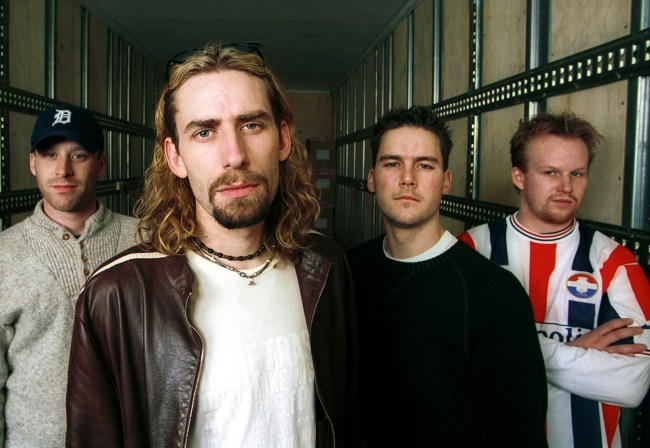 I want to preface this by saying this is NOT a Nickelback appreciation post. The last time I heard a Nickelback song in full was in the back of my mom’s Ford Taurus on the way to Blockbuster Video before lobbying her to let me rent something with full frontal nudity. Hence why I can’t recite you the lyrics to one Nickelback verse, but I know every line in Titanic.

(P.S. Hey Blockbuster, are the metal detectors really necessary? No one is stealing ‘Baby’s Day Out’ on VHS. Take a Xanax.)

This is an anti-bullying post, and in the wake of Nickelback’s Twitter viral Twitter announcement, the same people who use the term “microaggression” unironically came out in force to shame a group of people over the pursuit of their life’s work.

Don’t get me wrong, hating is fun and therapeutic. We just have to be consistent.

So, in an effort to quell the Nickelback vitriol, my BroBible colleagues and I have compiled a list of bands that couldn’t hold Chad Kroeger’s ramen noodle hair back as he’s puking out hits.

There is plenty of hate to go around, and this collection of ear abusers are long overdue for their helping.

Imagine Dragons’ 2017 hit Thunder has over 1.5 BILLION listens on YouTube and every single stream was played through the speakers at your local mall’s PacSun.

Credit where credit’s due: Radioactive has lived up to its name.

If you or a loved one visited a strip club and were exposed to Buckcherry’s “Crazy B*tch,” contact the law offices of Morgan & Morgan because you could be entitled to a free lap dance and a new set of ear drums.

Best Known For: The Reason, Crawling In The Dark

“And what is the name of your band?”

“No further questions, your honor.”

Five For Fighting: The Official Music Of A Dentist Waiting Room.

It’s been reported that dentists play Five For Fighting on repeat in the waiting room so a root canal doesn’t seem so bad.

These guys are the human manifestation of unbuttered popcorn.

The lead singer of Train is who Jesse Katsopolis would be if he moved out of Danny Tanner’s house and pursued his dream with some goddamn conviction. And also picked up an addiction while Aunt Becky is locked up for bribing the private kindergarten to let their pumpkin-pie haircutted twins in.

Uncle Jesse and The Rippers are Diet Train.

Or as my co-worker Jorge accurately put it:

Papa Roach is for the dude who really wants to listen to Train but his dad made him join the football team because the military won’t accept applicants with scoliosis.

Best Known For: She Will Be Loved, Sugar, Moves Like Jagger

Maroon 5 is the music Karen sings karaoke to at the holiday party, revealing to everyone that she’s never been out of the country and her and her husband sleep in separate beds.

I truly believe that Maroon 5’s popularity is the direct byproduct of herd mentality. I do not know one person who’d categorize themselves as a “fan,” everyone just tacitly accepts them and I think’s it’s time we finally ask ourselves why before they release a Christmas album.

Best Known For: It’s Been Awhile, So Far Away, Outside

It’s Been Awhile since I listened to Staind because my frontal cortex is now fully developed.

Full Disclosure: So Far Away was my jam when I was going through my chin-strap and chain wallet phase. Dark days.

Best Known For: With or Without You, Beautiful Day, I Still Haven’t Found What I’m Looking For

Hey Bono, maybe if you took those damn shades off every now and then you’d finally see how much your band sucks boom roasted.

*with the exception of Sunday Bloody Sunday

Best Known For: All Star, I’m A Believer, Walkin’ On The Sun

Smash Mouth is approaching Nickelback in the scope of public mockery, but they are still doing shows so unfortunately we haven’t eradicated them completely.

I’m also bitter at Smash Mouth because a Sports Illustrated model refused to attend their concert with me. Damnit Smash Mouth, why can’t you be Beyonce.

Here is a collection of these trash bands in a playlist. Shame on us for validating Five For Fighting https://t.co/yZMZLUxkmY