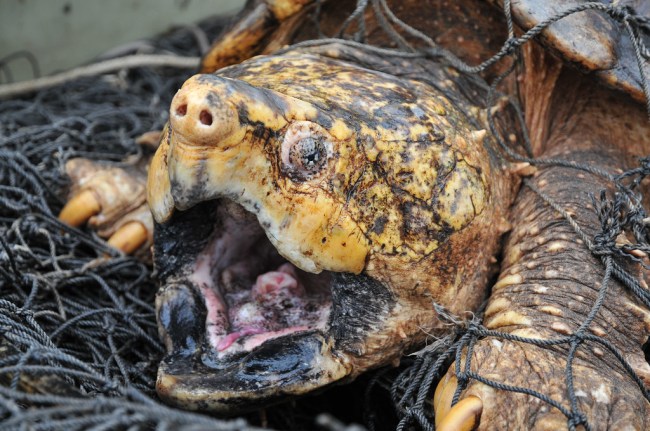 I guess it’s not factually correct to say that this 100-pound Alligator Snapping Turtle would wipe the floor with a dinosaur because in my opinion, this turtle is 100% a living dinosaur. Just look at it. This thing’s 50% dino and 50% pokemon. It’s closer in appearance to an alien straight out of a Science Fiction film than anything else in life.

I remember when I was a kid I caught an Alligator Snapping Turtle in the creek behind my parent’s house and it wasn’t until I dragged it up to the house and showed it to my parents and was met with shock and screaming that I realized how dangerous these creatures can be. They have a 1,000-pound bite force which puts them on the list of animals with the strongest bite on the planet. In fact, they just barely make the top 10 and are edged out by Hyenas with a bite force of 1,100psi.

Bite force aside, this creature looks like a living nightmare to some people. Spikes protrude from all parts of its body. It has the gnarliest beak. Don’t get me wrong, I think this is one of the coolest creatures around but I also recognize that I’m probably in the minority here and most people find this hundred-pounder absolutely horrifying.

This 100-pound male Suwanee Alligator Snapping Turtle was found by field biologists along with a 46-pound female and another 64-pound male in The New River. Look at this monster:

How are we honestly supposed to just accept that these things exist but aliens aren’t roaming America and dinosaurs are extinct? If there’s an biological argument for the existence of aliens (outside of the octopus) the Alligator Snapping Turtle has to be it, right? They look like they’re straight from another planet.

If your skin isn’t crawling from those images from the FWC’s Facebook page, then maybe this video will do the trick:

With these guys swimming around in rivers I feel like we’re running out of places to swim these days. They might call it a ‘myth’ that these guys attack humans but I have trouble believing that mouth and bite force was developed for anything other than crushing bones.