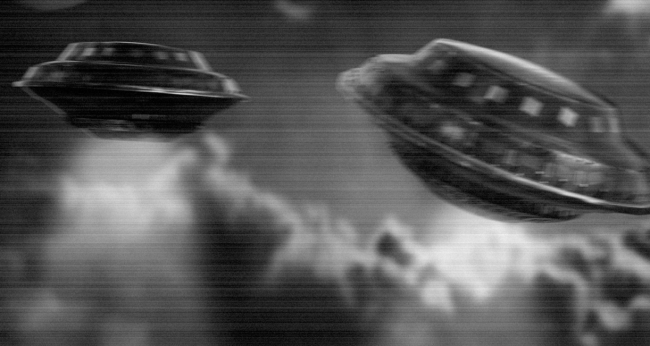 This incident took place off the coast of Southern California in July 2019 and was witnessed by at least a dozen crew members, according to Corbell.

The video, verified by the Pentagon, showed UFOs on radar hovering at 21,000 feet for more than four hours and flying at speeds of 158 mph, according to Navy documents.

Corbell recently explained to The Sun, “It was understood that they disappeared into the water, leading to the hypothesis that these objects are transmedium.

“Transmedium is the ability to traverse space, air or sea without destruction, seemingly defying the known laws of inertia.

“As an example, our greatest aerospace capabilities require heat shielding. That change in medium is so dramatic that our craft can barely resist.

“However these advanced crafts that we know of as UFOs appear immune to our understanding of inertial effect. For example, moving faster than the speed of sound without a sonic boom.”

Corbell added that this capability “leads our military to believe that they’re gravitationally propelled,” meaning, “they appear to envelope their craft with a gravitational distortion to allow for true transmedium capability beyond what our military or any technologically advanced nation has been able to demonstrate in the theater of war or otherwise.”

The US Navy photographed & filmed “spherical” shaped UFOs & advanced transmedium vehicles; here is some of that footage. Filmed in the Combat Information Center of the USS Omaha / July 15th 2019 / warning area off San Diego @ 11pm PST. No wreckage found. No craft were recovered. pic.twitter.com/tK1YTG8sJ7

Deputy Director for Naval Intelligence Scott Bray told Congress back in May that he was “reasonably confident” that the UFOs in this case were nothing more than drones.

“I don’t care if these were ‘drones’ or true UFOs, pyramids, triangles or even seagulls with lights strapped onto their wings,” Corbell told the Daily Mail. “I want the fundamental question to be answered. Do we know the controllers of these units?”

Corbell added, “We don’t know yet what exactly these craft were. But whatever they are, their abilities and presence alone represents a serious national security issue and shouldn’t be dismissed out of hand.”

A Naval crewman with knowledge of the incident told the Daily Mail, “We don’t yet have enough information to say whether this is man-made technology or not. But the amazing energy capacity of these craft is world-changing regardless.”

A senior staffer at a US defense contractor with expertise in military technology added, “The best quadcopter battery lasts an hour or so. Climbing four miles takes time, and once the vehicle reached that altitude it would struggle to maintain a fixed or slow-moving position over the ship as the wind speed increased.

“Maintaining position under such conditions would increase the energy burn and greatly limit the time on target to just a few minutes, especially considering the quadcopter has to return to its point of origin. In addition, the reports mentioned the vehicle was illuminated, further increasing its power drain.”

He also pointed out that top quadcopters have a maximum range of about seven miles, which means they would have had to have been launched from a vessel that would have been easily detected by the Navy ships.

Yet that’s the explanation the US government is giving us.

Hey @G_Knapp it seems like history is repeating itself. These reports are WAY before the idea of black project “drones” were a thing… right? https://t.co/FGEHx5YbEX