Over 100,000 Cruise Ship Workers Have Been Trapped At Sea For Over Two Months With No End In Sight 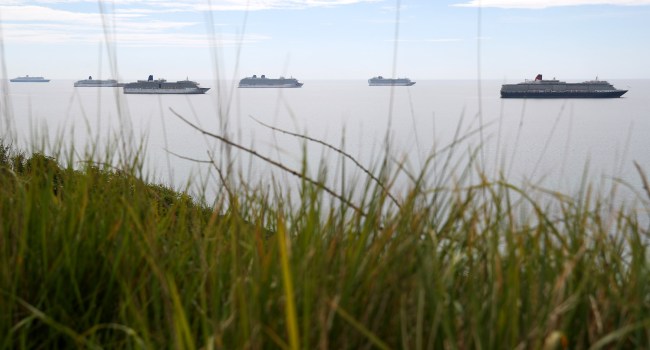 While cruise ship bookings have begun to skyrocket now that companies like Carnival are once again taking reservations there is still the small matter of over 100,000 cruise ship workers who, for over two months now, have been trapped at sea and unable to return home thanks to the shutdown.

The shutdown in the cruise industry officially began on March 13th and was expected to last, at most, for 30 days. 66 days later, very little has changed.

Satellite images show armadas of idle cruise ships anchored together <- now that's one industry that's a) going to be comprehensively reshaped, and b) unlikely to restart soon in any way shape or form https://t.co/RrV3R3CSq7 pic.twitter.com/lPWyjy0Tei

Taylor Dolven of the Miami Herald, who has seen numerous cruise ships come into port there to refuel, while not letting crew members off the boat, reports…

While most passengers were able to get off cruise ships by early April, crew members have largely remained stuck. During the prolonged isolation, the virus continued to spread through the ships. At least 578 crew contracted COVID-19 at sea and seven have died, according to a Herald analysis.

At least two crew members have leaped overboard in apparent suicides. On May 10, a 39-year-old crew member from Ukraine on the Regal Princess ship died after jumping overboard while the ship was anchored off Rotterdam, Netherlands. Late last month a crew member jumped off Royal Caribbean’s Jewel of the Seas ship while it was near Greece; his body was never found.

The U.S. Centers for Disease Control and Prevention (CDC) banned cruising in U.S. waters back in April running through at least late July. However, there has been no concrete date given to the thousands of cruise workers, many of whom have been stuck small, windowless rooms, for when then can disembark.

“[The cruise companies] have to show they are going to have the capability in an emergency situation to get people at scale off of the ship and back home,” said Teijo Niemela, editor of Cruise Business Magazine. “They have to be able to convince their customers they can find solutions and work constructively with public health authorities. The time for excuses at this point in May, there’s no excuse for not finding the way home.”

According to Dolven, Carnival Corporation still has 67% of its crew at sea, MSC Cruises has 24%, Disney Cruise Line has 67%, and Royal Caribbean Cruises still has an estimated 77% remaining on their ships.

“We don’t know where we will end up, no one will accept us,” said Gan Sungaralingum, a worker on Carnival Corp.’s Sky Princess.