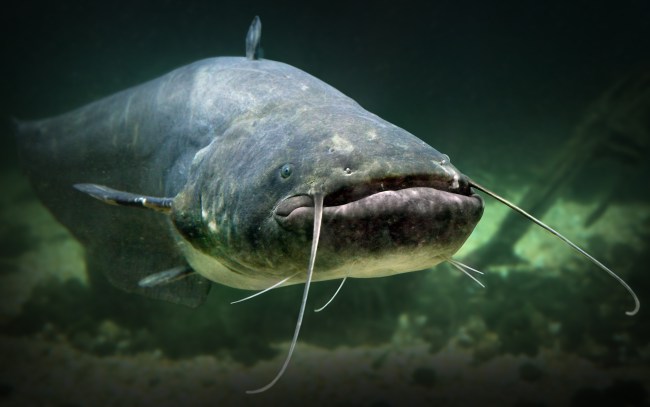 Angler Tim Trone of Havana, Florida just fished his way into the record books while fishing a tournament this month at Lake Eufaula in Georgia. This whale of a catfish didn’t fight like a small submarine, confusing the angler in the process, and it took multiple scales + a bunch of phone calls before this fishing story came to a close but when it was all said and done this new Blue Catfish fishing record for the state of Florida clocked in at a whopping 111-pounds.

The previous Georgia state record for a Blue Catfish was a 93-pounder caught on the Altahama River by angler Richard Barnett just a few years ago back in 2017 but this new fish completely shattered that record by a margin you almost never see when it comes to fishing records.

Tim Trone was fishing the Chatt Kat catfish tournament at Florence Marina on Lake Eufaula back on Saturday, October 17th when he fished his way into history. He hooked this record Blue Catfish in what he says was 40-45 feet of water and at first, he has no idea what was on the line. You’d think with a 111-pound catfish it would’ve smashed the line and bent the rod in half but he first believed he’d hooked up to a sunken tree.

“The fish bit like a big turtle, nothing hard, just a little bump,” said Tim. “When she went to pull down, I started reeling up. When I reeled, the line just came right up. She never fought. She reeled like a 100-lb. floating log, no fight. “When the fish hit the surface, I saw the tail and thought to myself that I had the big, 50-lb. fish I had been looking for. I was excited.

“When I reeled her closer to the boat, I was like, ‘Oh my gosh! What is this?’ I got her by the boat and thought to myself, ‘How am I going to get this fish in the boat?’ I have a great big net, but all I could think was I got to get my hands in her gills because I wasn’t going to stick my hand in her mouth. I had my rod in one hand and had reached down there and stuck my fingers up in the gills, not caring how sharp the gills were. I decided that if I lose a finger because of this fish, I was fine with it.

“All I remember is putting my hand in the gill and the next thing I remember I was standing over that fish looking at it in the bottom of the boat. I don’t remember pulling her over the side or putting her in the floorboard or nothing.” (via Georgia Outdoor News)

So he’s reeled this tiny submarine of a catfish into the boat and realizes he likely has a record-setting fish on his hands and now he has to go through the next steps of certifying the fish. This means finding a certified scale nearby.

He found out there was a fellow fisherman on a river nearby with a 100-pound scale so he tracked that guy down to weigh the fish but it immediately bottomed out the scale and they realized they needed something larger. A 100+ pound certified scale isn’t exactly easy to come by in an area of the country where fish don’t really weigh over 100-pounds but he was able to find someone with a 300-pound scale so he tossed the fish into a 100-gallon aerated tank in the bed of his pickup truck and went to that scale.

On the 300-pound they were blown away. The Blue Catfish actually tipped the scale at an astounding 151-pounds which would’ve made this a world record fish. As you can see from the pictures, it’s easy to believe that this fish is 151-pounds because it’s larger than most feral hogs in the world. But Tim Trone needed a certified scale in order for this his catch to be considered for the record books. Another obstacle here was the UGA/Alabama game taking place so people in Georgia were busy!

“So everything got done, we won the tournament, and I got home and started talking to some people,” said Tim. They finally connected with Jerry Baggett, the owner of Jones Country Meats, Inc. in Climax, and he agreed to interrupt his watching of the UGA/Alabama game to meet them at 10 p.m. to get a certified weight on the fish. “Our scales are certified by the state, and the fish weighed 111 pounds,” said Jerry.

Now Tim had to figure out what to do since he had a difference of 40 pounds between the weights, even though the one at Jones Country Meats, Inc. was a certified weight, and the 300-lb. scale at the ramp was obviously just inaccurate. “I decided I was just going to take that fish to Albany (Fisheries office) on Monday morning,” said Tim. “Saturday I told my boss I wasn’t going to be at work Monday. I sent him a picture, and he was all happy for me.”

Earlier today, Tim ended up at Paradise PFA where WRD also weighed the fish on their certified scales, and it registered at 110-lbs., 6-ozs., which is the weight the state recorded on the Georgia State Record Freshwater Fishes listing. GON will recognize the 111-lb. weight recorded at Jones Country Meats, Inc. for the new Lake Eufaula blue catfish record. (via Georgia Outdoor News)

The record has already been added to the official Georgia Wildlife set of state fishing records. On this PDF, you can see Tim Trone’s name with the official weight of 110-pounds-6-oz. The official location is listed as the Chattahoochee River.

Tim’s record-setting 111-pound Blue Catfish isn’t just a state record for that species, it’s also the largest freshwater fish of any species certified in Georgia’s record books. A comparable fishing record is the 83-pound Flathead Catfish record which has been set/tied by two anglers, once in 2006 and another time in 2010, both on the Altamaha River.

For more on this garganutan catfish and to read about Tim’s record-setting catfish, you can head on over to Georgia Outdoor News.