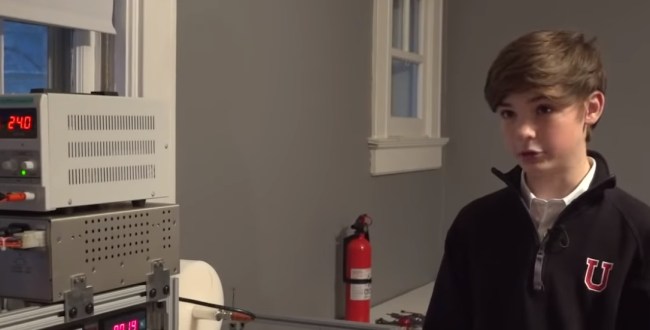 What was it like when you were 12-years-old? What marvelous accomplishment did you achieve in your youth? Did you set a record with the most services purchased from prostitutes in Grand Theft Auto: San Andreas? Did you construct a bong out of a toilet paper roll? Well, your childhood achievements are a smidge lacking when compared to Jackson Oswalt, a kid who built a frigging nuclear fusion reactor in his house.

Richard Hull, a retired electronics engineer with the research consortium and an administrator for its website Fusor, verified Jackson’s work and have said that he is the youngest person to ever achieve fusion. Jackson consulted the Fusor website and its online forum for advice from fellow amateur physicists.

Using vacuums, pumps, and chambers that he bought off of eBay, Oswalt was able to fuse two deuterium gas atoms into helium. The youngster was able to create a neutron from smashing the atoms together and accomplish fusion. I feel bad for anyone in Jackson’s school with the slight hope of ever winning the science fair. I mean, you’ve got somebody who created fusion in your school, your baking soda volcano ain’t gonna cut it.

“The start of the process was just learning about what other people had done with their fusion reactors,” Jackson said. “After that, I assembled a list of parts I needed. [I] got those parts off eBay primarily and then often times the parts that I managed to scrounge off of eBay weren’t exactly what I needed. So, I’d have to modify them to be able to do what I needed to do for my project.”

“Being a parent of someone that was as driven as he was for 12 months was really impressive to see,” Jackson’s father Chris Oswalt said. “I mean it was everyday grinding; everyday learning something different; everyday failing and watching him work through all those things.”

Just be careful kid, one moment you’re making nuclear reactors, the next minute you’re being hunted by Libyan terrorists who you stole plutonium from to make a time machine instead of making them a nuclear weapon.