15 Years Ago Today, I Saw Phish For The First Time And It Changed My Life 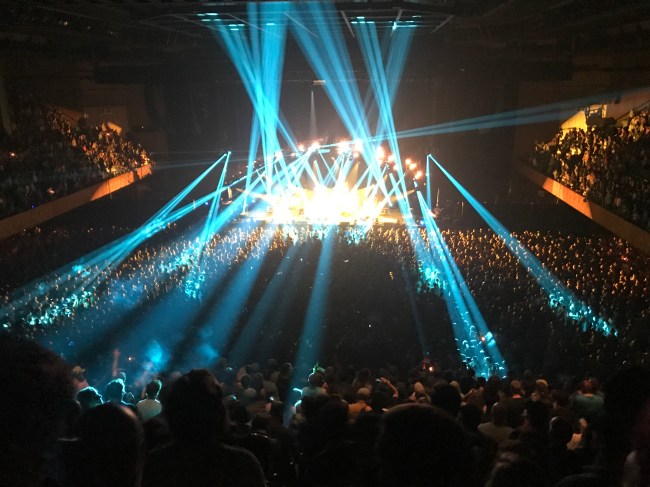 Memories are weird. We barely remember what we had for lunch yesterday, yet we can remember the first time we had fried Oreos or puked up watermelon-flavored Four Loko. When you look back at your teenage years, there are an awful lot of things you forget: The brand of socks you wore on a daily basis, for example, or the now-dated references you made to Ben Stiller movies. But you definitely have a few transformative memories etched into those neural synapses: Memories of joy, kinship, heartbreak, enlightenment, loss, etc. Those experiences — lodged deep in the sensory cortex part of your brain — sculpt you into you, for better or worse.

On September 15, 2000, I saw my first Phish show at Hershey Park Stadium. It was a Friday night. My dad drove my friend Corey and I to the show right after school. I don’t even remember what 9th grade class I had before we did the hour drive to Hershey from my hometown in South Central Pennsylvania, but I do remember we stopped to eat MTOs at Sheetz. The weather? A crystal clear evening, with a brisk hint of autumn’s cool distinctly in the air. A perfect night for football. And dancing to the funky overtures of four 30-something-year-old white dudes from Vermont.

As a teenager right smack dab in the middle of puberty who loved music and grew up surrounded by it (…both my parents are music teachers), my very first Phish show was one of the most electrifying moments of my life. It was instant sensory overload: Lights and colors and 20,000 people in synch with spacey grooves. Grizzly dudes wearing Merrell hiking boots and hoodies talking about trips to Maine and Montana. The distinct dank odor of marijuana wafting on the 30-yard line of a glorified high school football stadium. 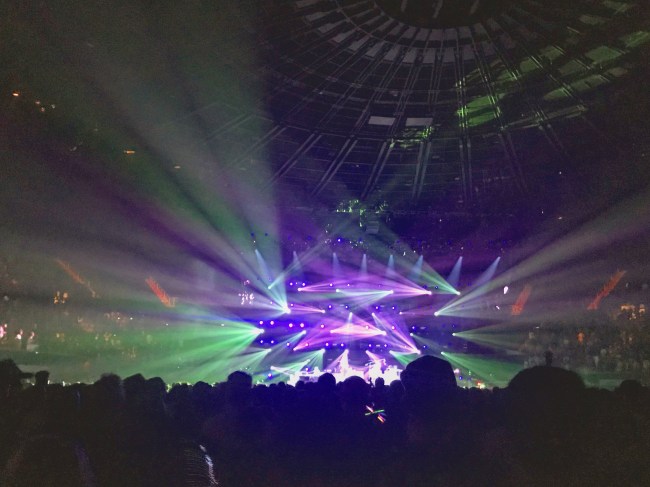 For someone who read way too much Jack Kerouac the summer before and was hungry for any kind of adventure, the experience of a Phish show at age 14 was everything and more. In was a taste of adult independence. The music — playful, irreverent, random, improvised, and sometimes straight up goofy — struck more than a nerve with my awkward, teenage self. It just, like, “fits my personality, man.”

As Key and Peele noted, “When dudes get into Phish, they don’t come back.”

Here’s how I recounted my first Phish show, 15 years ago to the day, to VICE last summer:

My first Phish show was in September of 2000, just a couple of weeks before my 15th birthday, at Hershey Park Stadium. I was in 9th grade at the time, avidly collecting fan-made live Phish recordings from traders off eTree.org after buying A Live One a few years earlier. My Dad dropped a high school friend and I off outside the venue that Friday night, where we strolled wide-eyed through the parking lot at college-age dudes in patchwork shorts drinking beers, playing hackysack, and hawking t-shirts on the central gypsy market that we had only read about on online Phish message boards: Shakedown Street. Before the show even started, we geeked out as impressionable adolescents about scene: “This must be what college is like,” we snickered. Phish opened my first show with “First Tube.” The kick was immediate, with 17,000 people jumping into a dance groove in unison upon Mike Gordon’s fat bass downbeat. Coupled with the wall of sound, the dancing made for instant sensory overload, like the band was pulling marionettes through their music to make the crowd dance. I had never seen or felt anything like it. I was hooked.

I have a very distinct patchwork of memories from that show beyond just that first dose of live Phish that forever threw me down their musical rabbit hole. The “Bittersweet Motel” to close out the first set, with the Pennsylvania crowd delighting in the “Halfway between Erie and Pittsburgh!” line. The playfulness of “Windora Bug.” The “Antelope” with Trey’s old buddy/songwriting pal Tom Marshall bringing out his daughter (…who is probably now in college? whoa) for the “Rye, Rye Rocco.” The awesome glow stick war during the “Character Zero.” The long-sleeve navy blue Phish tee I bought at the merch stand that evening is still in my closet. It has some moth holes chewed in around the collar, but it still fits just fine. I don’t think I’ve grown in that direction since the year 2000.

But most distinctly, the Tube jam that followed it. Listen to it above! Now close to 90-shows later, this particular Tube remains one of my favorite jams in the Phish catalog. I remember everything about being there perfectly: In the middle of the jam, a girl in front of us busted out a toy wand with red LED lights that read “Space Jam” when twirled in the air. The song itself clocks in at nearly 18-minutes long, blasting into a spacey start-stop groove that makes me feel all warm and fuzzy. Trey dolled around on a little keyboard next to his amp. It’s a sweet musical raisin laced with cosmic comet dust — one of those gems I just throw on in the shower and have that specific moment in time melt all over me again.

My friend Corey’s mom picked us up afterwards, around 11:30 PM. We were on cloud nine driving back to their house that evening. I think we stopped at a Sheetz in Mechanicsburg or Carlisle on the way home for MTOs because we were both starving? Two MTOs in a day seems par for the course for both my trash diet and teenage metabolism at the time.

I’m not sure what I got; probably an Italian hoagie on wheat with spicy mustard, add sweet peppers. That’s my usual order.

Every time I run into Corey at a wedding, Phish is always the first thing we talk about. Heck — Fast forward 15 years to this past summer and I run into Corey’s mom with his older brother at the Mann Music Center during the second set of night two. Because in the Phish world, life comes full circle like that. Corey’s going to Mexico for Phish in January. I have four nights of Phish magic at MSG to look forward to.

It was perfect, as memories of transformative experiences are. It’s a moment of adolescence I wouldn’t mind living in forever.

15 years ago today. I’ll never forget it. Just thought it’d be a cool thing to commemorate.