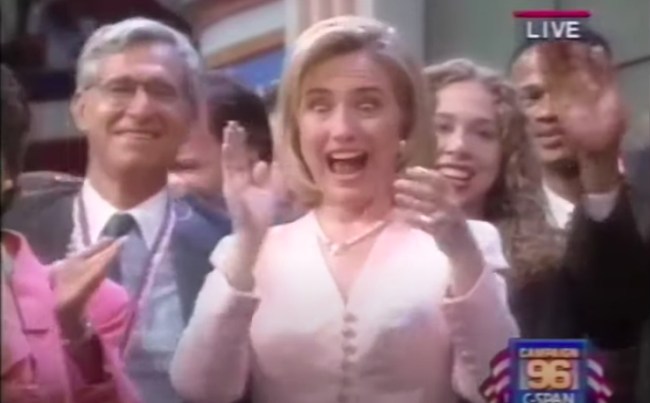 Anyone who thinks 2020 is bizarre is either a small child aged 10 or under or was in a coma during the 1990s because holy hell what were our Tamagotchi-feeding asses smoking? Oh yes, that’s right, candy cigarettes #GatewayDrug.

Those who claim to be affected by a global health crisis never felt the soul-crushing hollowness of returning to your AIM away message after a day out and not receiving one message. Not even from SmarterChild. This is why, two decades later, I throw my fist through a drywall when my team decides to punt on 4th and short.

Anyone who needs a refresher on just how free and chaotic things were before every thought and action was documented for the world to judge, please join me in re-visiting the highly-cringeworthy 1996 Democratic National Convention.

WHAT WAS THAT! CHAOS!

Here is Hillary Clinton hearing music for the very first time while Epstein’s doppelganger sways erratically with his pants at his ankles.

Ladies and gentlemen, I present to you, the Democratic Coalition of Women Whose Husbands Sleep In The Guest Bed.

Shortly after this video went public, all four of these women were offered jobs by Bill Clinton in a deal that would pay them “under the table.”

Sir, who do you know here? Go home to your children. Fun’s over, Van Gundy.

The 90s were a dream. A very weird dream.

I broke down the film pic.twitter.com/8qU9Ggr2QC