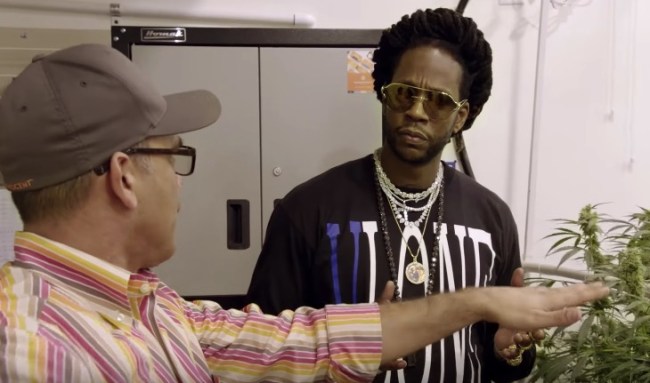 One of the fastest growing industries in America right now is cannabis.

The cultivation and distribution of both medical and recreational marijuana are in an absolute boom right now due to many states passing legalization laws of some form or another. Along with this has come not just the weed barons who are growing and moving cannabis across the landscape but there are cottage industries like the one we see here with 2 Chainz.

2 Chainz has a show with VICELAND called the ‘Most Expensivest’ and there’s a pretty good chance you’ve seen it on TV or even seen some clips here on BroBible. The dude basically gets paid to go around and test out the dopest, most expensive shit imaginable like this $90,000 ugly Christmas sweater or half a million on weed, bongs, and dabs.

For the latest clip, 2 Chainz met up with the CEO of Canndescent, California’s first major legal weed cultivator in the age of recreational legalization.

He gets to take a tour of the facilities and learn about how they grow the weed from start to finish and I’ll be honest, I learned more about growing weed from this short clip than I ever did from living with roommates who *actually* grew weed.

This facility is just as high-tech as any laboratory in America and it’s pretty much printing cash. He goes on to say that at this particular facility they’re cultivating around $600,000/month but will be up to $2.5 MILLION/month by some point in 2019.

Those figures are the thing I don’t get about the anti-legalization crowd. They’re perfectly fine with the harmful effects of tobacco and alcohol being sold legally but they’re willing to ignore the massive sums of money that can be made from legalizing cannabis across the board?

The industry creates jobs, is highly taxable, and thus puts money back into the community.

I fail to see where there’s any problem whatsoever with legalization when you account for there being *proven* medical benefits of marijuana while the same can’t be said for cigarettes.