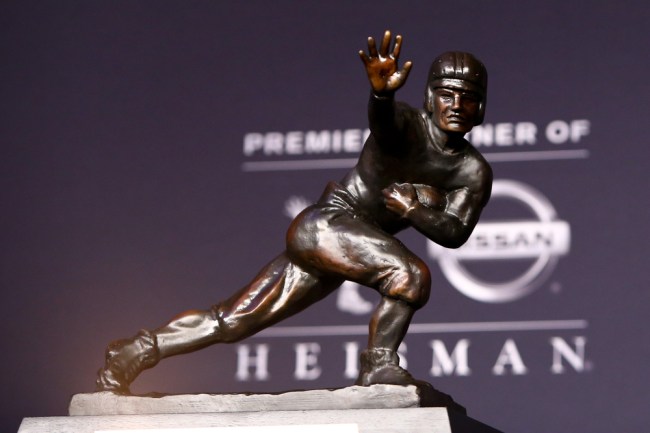 Oklahoma University’s Baker Mayfield went wire-to-wire as the 2017 early favorite to win the Heisman Trophy and ended up winning the award before falling in the first game of the College Football Playoffs. The first round of odds for the 2018 Heisman Trophy winner are out and it’s clear that we don’t have a ‘true favorite’ situation like we had last year.

Last year, Baker Mayfield opened up as a +550 favorite to win the award. This year, the top three favorites are +700, +800, +900. In last year’s first round of odds, there was JT Barrett at +600 after Baker Mayfield and Lamar Jackson at +700. So we’re definitely expecting a much more wide-open field this year.

Another interesting plotline is there are 3 running backs in the top 5 and only 2 quarterbacks. After the top 5, the field is full of QBs but the early favorites are mostly running backs. Alright, let’s check out the early odds for the 2018 Heisman Trophy award winner (via OddsShark.com):

Ed Oliver and Nick Bosa might look alluring down there as DLs with +5500 and +7500 payouts but you’re practically throwing your cash away on a defenseman to win the award. Some interesting names on the list right now are Trace McSorley, the quarterback for Penn State paying out at +1800, Kelly Bryan from Clemson at +1500, Cam Akers the running back from FSU at +2200 who broke Dalvin Cook’s freshmen records, and D’Andrew Swift the RB for Georgia. All of those teams will be in the mix next year and have the potential to get an invite to the Heisman ceremony in New York.