A 2,700-Calorie Breakfast Burrito Tops The 2018 List Of The Most Unhealthy Restaurant Meals In America 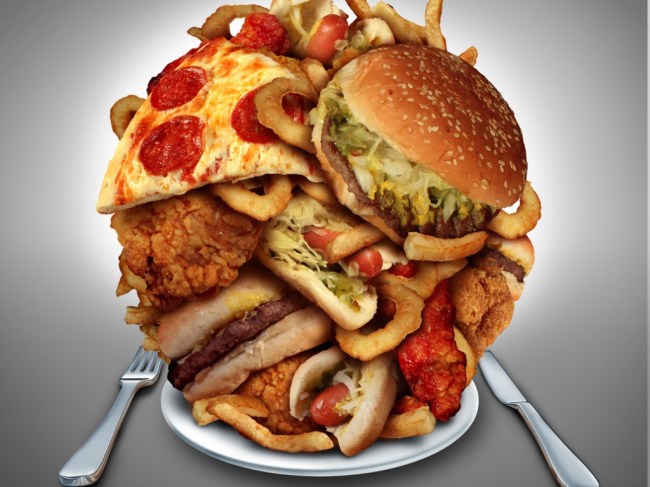 The 2018 Xtreme Eating Awards are out and this year they’re topped by a 2,700-calorie breakfast burrito. This monstrosity is the equivalent of eating seven McDonald’s Sausage McMuffins in one sitting. If you’re not familiar with the Xtreme Eating Awards, it’s an annual list that ranks the highest-calorie dishes at restaurants in America.

The average recommended daily intake for guys is 2,000 calories, 2,300mg sodium, 20g saturated fat, and 50g added sugar. These 2018 Xtreme Eating Awards dishes from restaurants across America pull down their pants in pass gas in the face of those recommendations. The breakfast burrito alone is 700 calories over the daily recommended intake. Of course, those are loose recommendations and they change base on body type, activity, needs, etc. That’s not a strict guideline but it’s a good goal post to use when calling out the worst food dishes in America.

Let’s check out the recipients of the 2018 Xtreme Eating Awards:

At Yard House, a Vampire Taco Combo comes with two 440-calorie tacos—each stuffed with pork, “bacon chorizo,” cream sauce, and guacamole— plus 610 calories’ worth of spicy rice and pinto beans. A coating of grilled-to-a-crisp cheese gives the tortillas their ooh-so-spooky, bat-wing-like look.

“Experience the legend,” says AMC. “Enjoy a snack that lasts all movie long when you treat yourself to 1.5 lbs. of soft Bavarian-style pretzel, sprinkled with coarse salt and served warm” with nacho “cheese” and mustard.There’s nothing like eating your way through a 9”-wide Bavarian Legend Soft Pretzel (that’s a pound and a half of mostly white flour—more than a loaf of bread’s worth) as you watch a movie. You’d be better off (shudder) with a large popcorn.

“Penne with aged cheddar, parmesan and romano topped with buffalo chicken and baked in a deep dish pan,”

What a meal! You get 930 high-quality calories in the burger, plus 420 in the fries. And you get to wash it all down with another 890 from the shake. (Why add a shake? Well, it’s not called the Shakeless Shack.)

As I mentioned above, the Xtreme Eating Awards are an annual report on the worst/most-caloric dishes at restaurants in America. If you want to see what the 2017 Xtreme Eating Awards looked like you can follow that link and check it out because most of those items are still on the menus.

For more information on the 2018 Xtreme Eating Awards including methodology and pictures of the food, you can CLICK HERE to visit cspinet’s report.