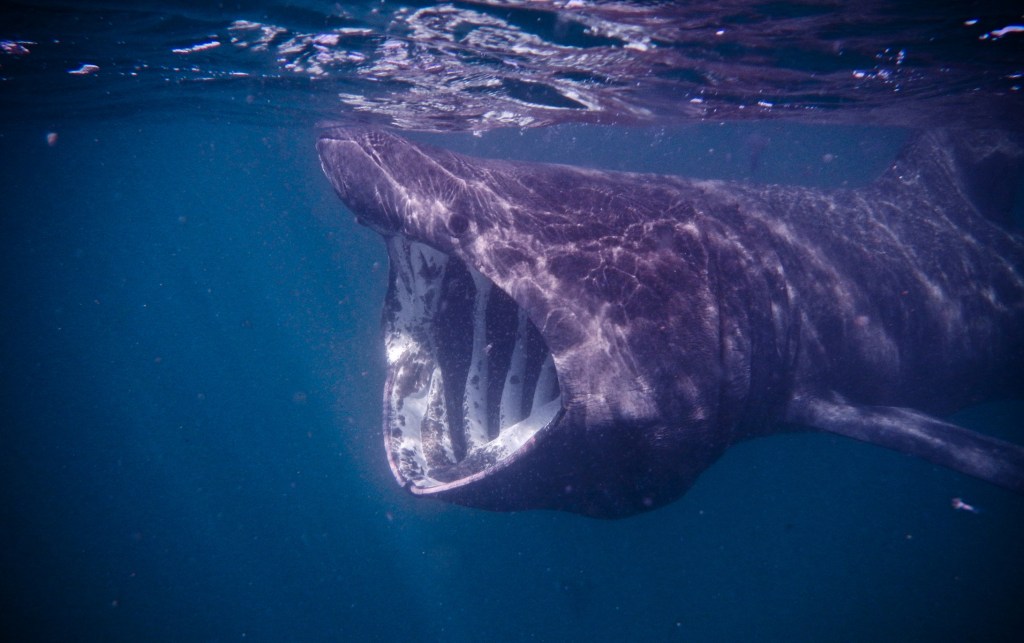 Tanner Fields is a fisherman in Bremen, Maine who was one of the first people to discover a 26-foot shark that had washed up on the shore. Let that sink in for just a moment, seriously. A normal full-size school bus is about 35-feet so this shark was more than 2/3 the length of a school bus. A Jeep Wrangler is about 14-feet-long so think of this as back-to-back Wranglers.

The 26-foot shark was a Basking Shark which poses virtually zero threat to humans. I’m sure there are urban legends of these sharks accidentally swallowing fishermen and swimmers because they open their massive mouths to swallow zooplankton by the gallon.

This was big news in Maine. The town of Bremen has a population of just 806 people. There’s not a whole lot going on there compared to many places. But a 26-foot shark washing up on the shores is big news.

Just for some much-needed distraction, here’s a pic of a basking shark that was found washed up in the Lincoln County town of Bremen. They are the second largest fish in the world. Photo credit: Maine Department of Marine Resources. @WGME @FOX23Maine pic.twitter.com/RQZS0tC1fd

WATCH: A 26-foot basking shark washed up on the shore in Bremen on Tuesday. Local fishermen reported it to the Maine Dept. of Marine Resources, who took samples for research. Basking sharks, the second-largest fish in the world, are not considered a risk to humans. pic.twitter.com/WAHvoD8zTG

friend of mine passed along images of a Basking Shark that has washed ashore in mid-coast Maine. LOOK HOW BIG IT IS. pic.twitter.com/55yxx0fFy0

Fishers in Bremen, Maine, discovered a dead shark the size of a pickup truck on their local shore Tuesday (Jan. 5), according to news sources. Tanner Fields, who was one of the first to discover the washed-up shark, shared video footage of the beached behemoth with News Center Maine.
Officials with the Maine Department of Marine Resources identified the gargantuan specimen as a male basking shark (Cetorhinus maximus, which roughly translates to “biggest-nosed marine monster”) and measured it at 26 feet (8 meters) long. As of today (Jan. 7), the cause of death remains unknown.

I can’t help but be reminded of the 50-foot whale in Oregon that was blown up (50 years ago) using too much dynamite because in these situations nobody ever knows what to do with the carcass other than lay there and rot and smell horrible. If you’ve never seen the video of the whale explosion it’s considered the first viral video in American history and you 100% need to check that out.

I remember walking the beaches of Siesta Key as a little kid and when we’d get hit with Red Tide I’d find all sorts of peculiar creatures washed up on the shore dead from the algae bloom. Most people can’t say they remember the first-ever ‘puffer fish’ they saw in the wild but I do because I was playing ‘500’ on the beach with my cousins and tripped in the sand and got a damn dead puffer fish stuck in my arm because it was all blown up and spiky (and hidden under seaweed) on the beach from red tide.

With the Red Tide algae blooms we knew to expect dead fish on the beach but we’d never see sharks or any larger marine animals. I’m not sure how I’d react if I was ever cruising along the beach first thing in the morning and happened upon a 26 FOOT LONG DEAD SHARK. That’s something you never forget.