This Guy Shot A .50-Caliber Rifle Into A Pool In 4K Slow-Motion To See What It Would Look Like 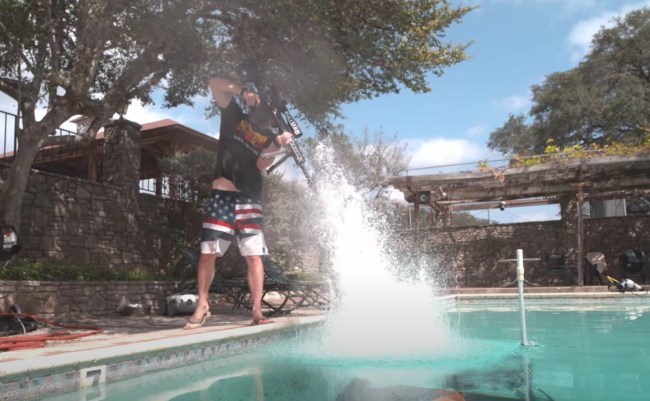 I vaguely recall an episode of MythBusters where Adam and Jamie fired guns into a pool to see what would happen based on movie scenes where people always seem to get shot at underwater and the bullets easily pierce through the water. What they found is water is pretty darn good at stopping bullets.

Flash forward to the present day and the FullMag YouTube channel is firing a .50-caliber sniper rifle into a pool to see what happens. As a pool owner, this definitely makes me clench my boys. The thought of a bullet penetrating the bottom of a pool and me having to shell out a small fortune to have it repaired is miserable. But like I said before, water is astonishingly good at stopping bullets.

Even with one of the most powerful guns around the pool survives. The water displacement and energy that branch out when those bullets hit the water is really impressive and it looks awesome in the 4K slow-motion footage. Check it out:

I like to imagine that they were by the pool playing beer pong and someone was like ‘we should find the biggest gun we have and shoot it into the pool’ and that’s how this happened. The lives of some of these YouTubers amaze me. They just get to tinker around and conduct experiments that then earn them enormous fortunes from ad revenue. It’s remarkable.

If you are looking for more content like that video above, might I suggest some previous articles that have appeared here on BroBible like Edwin Sarkissian testing ‘how bulletproof’ his Bulletproof Lamborghini really is, or this other video where he puts a bomb squad’s protective suit to the test by blowing it to pieces?

Amazing. It never stood a chance.