Can A ‘Bulletproof Lamborghini’ Really Stop An AK47? There’s Only One Way To Find Out 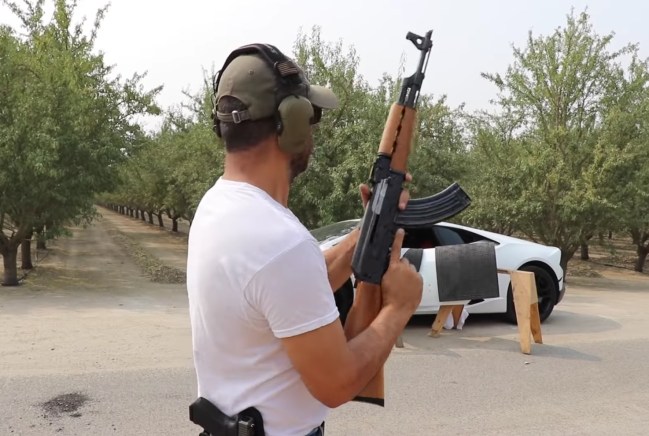 All things considered, Lamborghini was founded relatively recently. The company was founded back in 1963, just 57 years ago which means musicians like Garth Brooks and Sheryl Crow are older than Lamborghini as a company.

I say this because I’m sitting here thinking about having a time machine and going back to the World War I era and trying to explain this video to someone. That one day we will have this invisible ‘internet’ that holds all of the history’s collective knowledge and it connects every person on the planet with access but I’m actually going to spend my morning watching a guy shoot a quarter-million-dollar supercar with an AK-47.

The AK-47 is arguably the best-known gun on the planet. The numbers have certainly changed in the past sixteen years, but back in 2004, “of the estimated 500 million firearms worldwide, approximately 100 million belong to the Kalashnikov family, three-quarters of which are AK-47s.” They’re everywhere and they last forever.

Edwin Sarkissian is out here testing if his ‘bulletproof’ Lamborghini can stop the bullets fired from this gun along with a few other bullets. It was just two weeks ago that Ian Poulter hit a golf trick shot through the windows of a Ferrari and people lost their minds. This dude is out here firing combat rifles at a Lamborghini just to see what happens! The padding is to cover the mirrors and the skirt at the bottom while he fires at the door.

You can subscribe to Edwin Sarkissian’s YouTube Channel for more videos like this one. My personal favorite of his over the past few months was when he used an M67 Frag Grenade to test how a bomb squad suit actually holds up to explosions.

Here’s that clip of you want to check it out while you’re here:

Perhaps the most surprising aspect of this experiment to me is that they never used Buster on MythBusters to test this myth. They put Buster through every experiment on the planet while constantly working with explosions on MythBusters but I can’t recall a time they ever decided to specifically blow Buster up to see if the protective equipment worked.