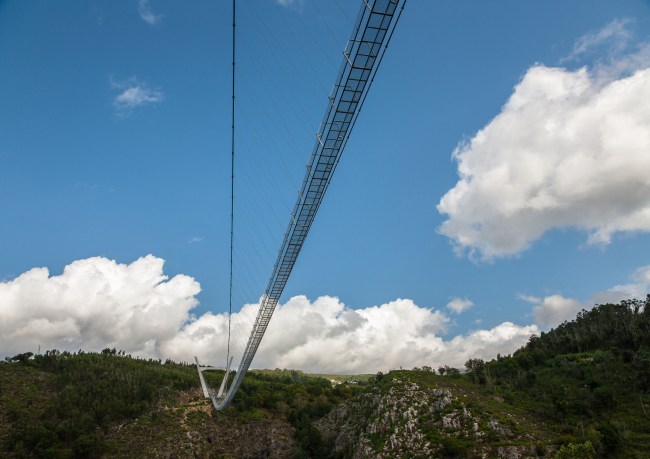 I’ve never had a proper fear of heights myself but it’s always been one of those phobia’s that’s really easy for me to understand. There are a lot of phobias that make zero sense to me like why people would be afraid of birds (ornithophobia) or how anyone could ever have an irrational fear of water (hydrophobia), but it’s pretty easy to understand why some people get scared of being up too high without a lifeline.

This bridge that’s about to open near Porto, Portugal (the home of Port Wine) is about to become a global attraction for a lot of reasons. Personally, I’d love to eat a bunch of edibles or chocolates and spend the day walking back and forth and taking in the sweeping views but I can imagine a lot of people will be pissing their pants when it comes to this bridge.

The walking suspension bridge will be the longest in the world when it officially opens this Fall and it measures 1,692 feet long, or 516 meters. It will be found in the town of Arouca which is 30 miles southeast of Porto and coincidentally a town I was looking at a house that’s for sale in just a few months ago because of its proximity to Porto.

If you’ve ever been to Portugal then you already know that much of the topography is a lot like San Francisco where you can be walking straight up a mountainside to get to your neighbor’s house and that means this bridge will come with an interesting trail leading up to it. Here are two clips of the new 516 Arouca bridge that will connect the Aguieiras Waterfall and Paiva Gorge at the Arouca Geopark, according to CNN. The first clip shows just the bridge with the second clip giving a cool sense of what the area around it is like and the full hike leading up to the bridge. Here’s a look at the perspective of the bridge:

And here’s the cool view of what it will actually be like for pedestrians looking to hike over the world’s longest pedestrian suspension bridge:

The only time I’ve ever had serious thoughts of ‘this is too high, we are unsafe’ was crossing that Chesapeake Bay Bridge from Annapolis over to the Eastern Shore because that bridge really needs some damn protective railings on the side. I later found out I’m not alone when it comes to that bridge and there are actually services to drive people over the bridge because it induces crippling fear in so many people.

I fully envision a lot of people making it about 50 feet out onto that suspension bridge before being overcome with crippling fear and having to turn around and walk back the way they came.

The longest pedestrian suspension bridge in the United States is a 680-foot one in Tennessee’s Great Smoky Mountains, that’s barely over 1/3 of the length of this new 516 Arouca bridge in Portugal.