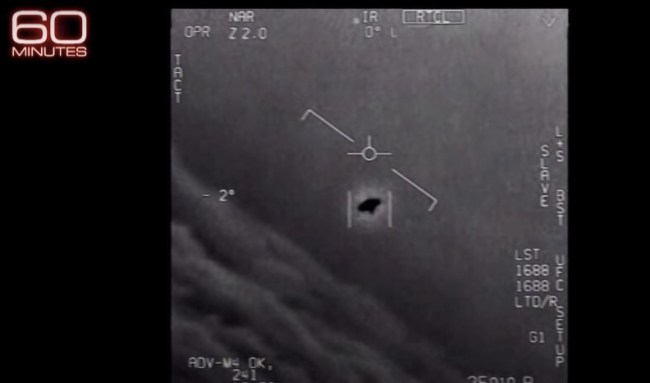 60 Minutes is one of my favorite shows on television. No kidding.

On Sunday, May 16, the long-running CBS news program aired a segment about aliens that represents just the latest recent confirmation of their existence. Speaking with two Navy pilots — Cmdr. Dave Fravor and Lt. Cmdr. Alex Dietrich — the segment detailed a 2004 encounter that saw the pair tasked with investigating “multiple anomalous aerial vehicles”:

What they found remains hard to describe. Fravor called it a “little white Tic-Tac-looking object,” which he said was about the size of his F/A-18F. Dietrich, in a separate plane, said it had “no predictable movement, no predictable trajectory.” Fravor claims that as soon as he tried to cut it off, it accelerated quickly, disappearing off his radar. When it reappeared on his system mere seconds later, it was 60 miles away. [via Uproxx]

In addition to the pair of Navy pilots, 60 Minutes correspondent Bill Whitaker also interviewed Christopher Mellon, a former Deputy Assistant Secretary of Defense for Intelligence for President Clinton and President George W. Bush, who also believed that Fravor and Deitrich encountered a UFO, as the aircraft demonstrated “advanced technological capabilities”.

Mellon also spoke about the Unidentified Aerial Phenomena Task Force, which was formed in August of 2020 with the aim of exploring these types of phenomena.

“What [the Pentagon is] acknowledging is that there are indeed aircraft that are… violating restricted airspace. This has been happening and continues to happen,” he said, “and we don’t know where they’re from, and we don’t understand the technology.”

The report from 60 Minutes from as the nation’s intelligence agencies prepare to speak to Congress about what they know about UFOs as a result of a “committee comment” section added to the Intelligence Authorization Act for Fiscal Year 2021.

“The director of National Intelligence and the secretary of defense have a little less than six months now to provide the congressional intelligence and armed services committees with an unclassified report about “unidentified aerial phenomena,” notes CNN.