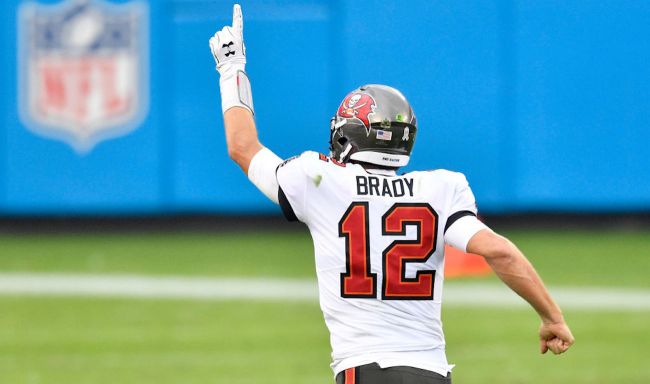 Tom Brady’s post-football life is now well and truly underway as reports out of Hollywood indicate that the 44-year-old future Hall of Fame quarterback is set to produce and STAR in a studio road trip comedy titled 80 for Brady.

Perhaps even more interesting than Brady’s acting endeavor are his co-stars for the film, as TB12 is set to star alongside Jane Fonda, Sally Field, Rita Moreno, and Lily Tomlin, who are all older than 75-years-old. Fonda is 84-years-old, Field is 75, Moreno is 90 (wow!), and Tomlin is 82.

No disrespect to these iconic actresses, of course, it’s just a bit odd that Brady’s first foray into movie-making will be alongside women who are twice his age. I suppose I always just pictured him making a low-brow buddy cop comedy with Mark Wahlberg or something. Maybe Ted 3.

Reportedly inspired by a true story, 80 for Brady tells the story of “four best-friends and New England Patriots fans who take a life-changing trip to the 2017 Super Bowl LI to see their quarterback hero, Tom Brady play, and the chaos that ensues as they navigate the wilds of the biggest sporting event in the country,” according to The Hollywood Reporter.

Brady, the movie, not the player, will be directed by Kyle Marvin, who also co-wrote the script with Michael Covino. Marvin, who appears as an actor in the upcoming Apple limited series WeCrashed and co-wrote and starred in indie movie The Climb, is also executive producing with Covino under the duo’s Watch This Ready banner and Jeff Stott.

Brady, making a transition from football player to Hollywood player, was deeply involved with the inception of the project, developing it with Donna Gigliotti and Endeavor Content. He will produce through his production company, 199 Productions, along with Gigliotti, who counts Hidden Figures, Silver Linings Playbook, and Shakespeare in Love amongst her credits. [The Hollywood Reporter]

While 80 for Brady is set to begin production this Spring, no official filming date or release date has been announced.

Taking over Hollywood isn’t Tom Brady’s only retirement endeavor, as he also recently launched BRADY, a clothing apparel line that he hopes to turn into the next Jordan.

RELATED: Plugged-In NFL Insider Believes Tom Brady Will Play Next Season, But Not With The Bucs