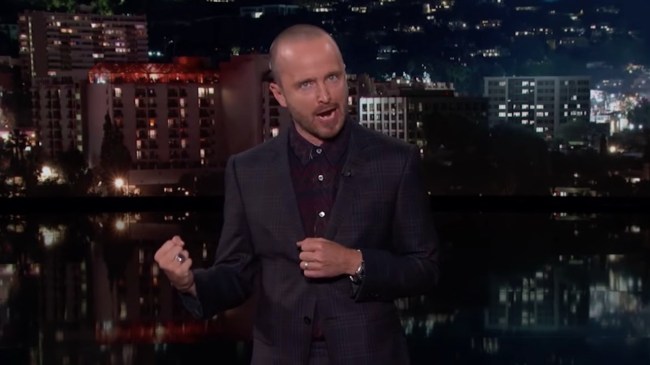 With El Camino: A Breaking Bad Movie dropping this Friday, Netflix has been working Aaron Paul to the bone, as he’s been doing interviews and appearing on late-night television all across the country in the lead-up to the highly anticipated sequel.

Appearing on Jimmy Kimmel Live! on Wednesday, Paul did the audience the favor of recapping all of Breaking Bad in less than two-and-a-half minutes, which is no small feat considering the iconic series consisted of 62 episodes over the course of five years.

From Crazy Eight falling through the bathtub in the hallway to the “scary chicken man” that was Gustavo Fring and the cartel to Jesse’s eventual El Camino-fueled escape from Neo-Nazi captivity, Paul runs through all the major plot points of the legendary meth-cooking series.

In addition to his mile-a-minute recap, Paul also did the status quo sit-down with Kimmel, where he discussed keeping the film’s Albuquerque production a secret, doing a scavenger hunt in Boise for tickets to the movie’s premiere, and debuted a never-before-seen clip of the highly anticipated film.

You can check out the rest of Paul’s appearance on Jimmy Kimmel Live! below:

Also, the fact that Kimmel is still dropping “apologies to Matt Damon” at the end of episodes is absolutely hilarious — he’s kept this running joke going, which has become one of the best on late-night television, for over 15 years now.

El Camino: A Breaking Bad Movie — which Aaron Paul promises that everyone will love — will hit Netflix and select theaters across the United States tomorrow, Friday, October 11.