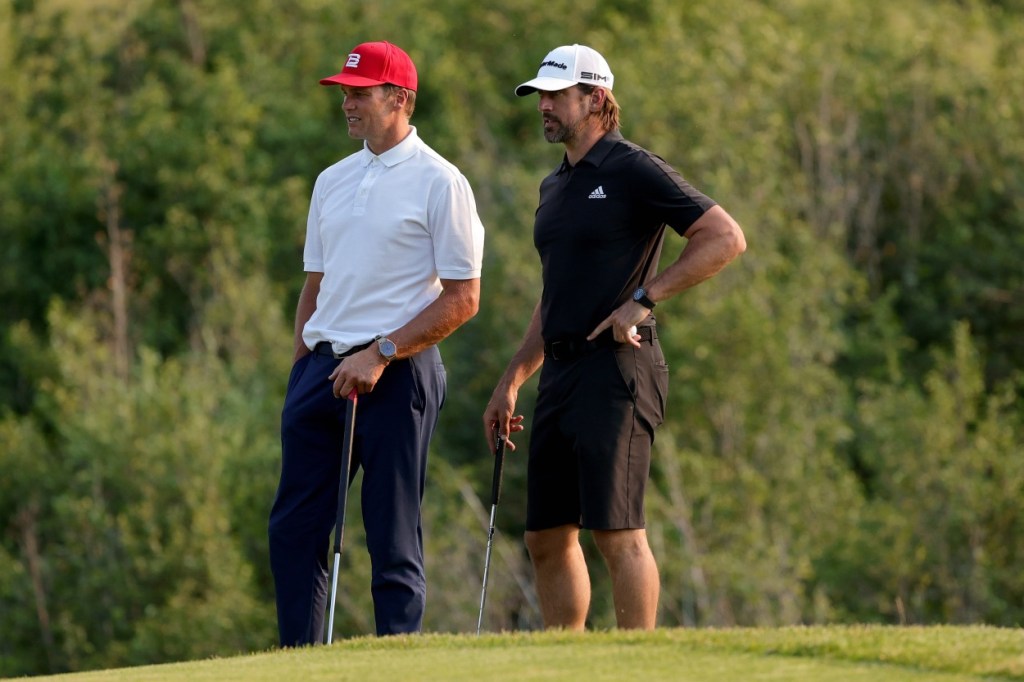 At this point, I’m all-in on Aaron Rodgers and Tom Brady winning The Match on June 1st against Patrick Mahomes and Josh Allen. For starters, Brady shared an insane drone video of holing out from the fairway and it’s clear that his golf swing is as good as it’s ever been. Also, they’re winning the trash talk war and it’s not even close.

Speaking at a press conference on Wednesday ahead of The Match, Aaron Rodgers and Tom Brady eviscerated the younger QBs for having the weakest trash talk game around. A-Rod told PEOPLE that Patrick Mahomes and Josh Allen need to hire some stand-up comics to write their material or they’re at risk of getting destroyed by the NFL vets.

Aaron Rodgers: “They better have some prepared material that’s written by you know, Bill Burr and Brian Regan because they’re not gonna be able to hang with Tommy and I. You have to understand, Tom and I are from the older era.

Now, it’s more buddy-buddy you know, social media, following each other, memes, all this emoji s–t and it’s not the same. So when you talk about, you know, Kermit the frog and Josh trying to s–t talk me and Tom, a couple of old school grizzled vets … come on.”

Tom Brady: “Golf s–t talk is a little different than pro football s–t talk. Usually, pro football talk, you usually have to back that up.

Josh really hasn’t backed that much up on the football field in his career, let’s be honest, especially playing against me. I’d just say it’s going to look like what it’s looked like for a long time against him.

Patrick, you know, although he’s played a lot of great games, he didn’t win anything. He’s won a few of the other ones, but not the important ones.”

I’m not saying that Josh Allen and Patrick Mahomes have a zero percent chance at winning The Match against but the young quarterbacks just got destroyed by words.

On top of that, Tom Brady and Aaron Rodgers hold the edge when it comes to golf according to their handicaps. Aaron Rodgers has a 4.6 index, Tom Brady is an 8.1 index, Patrick Mahomes is slightly better than Tom at 7.7 and Josh Allen is the worst of the group at 9.0.

I have a sneaky suspicion that Josh Allen will come in HOT though given that he has the highest index and will want to impress the world against A-Rod and Brady. I also think, from personal experience, it’s a lot easier to improve at golf at the age of 26 than it is when you get older and are more set in the ways of your swing.