Tom Brady Trash Talks Everyone, Even His Own Partner, In Pre-Match Chipping Contest 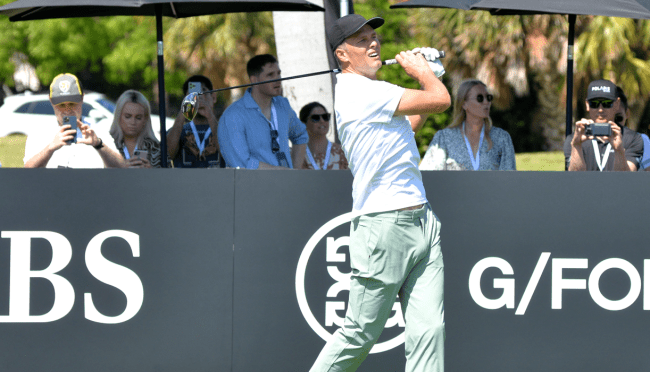 Tom Brady is ready for The Match. Tom Brady has no chill.

On June 1, Brady will be teaming up with Green Bay Packers quarterback Aaron Rodgers against the pairing of Patrick Mahomes of the Chiefs and Josh Allen of the Bills in another edition of The Match.

This week, each of the four quarterbacks participated in a little chip challenge, with each trying to hit a target made out of a full size image of one of their wide receivers. Each player had 60 seconds to drop as many balls as possible into the target.

Brady, who was chipping to his wideout Mike Evans, took that opportunity to trash talk not only his opponents Patrick Mahomes and Josh Allen, but even his own partner Aaron Rodgers.

“I got my boy Mike there ready to catch, I don’t even know who caught Aaron. Davante left him, and Tyreek left you, Patrick. Josh, don’t worry, someone’s gonna leave you too.”

That remark had Josh Allen hugging his target Stephon Diggs and telling him he loves him.

“Mike never left me. I’ll tell you that,” Brady continued. “But anyway, we’re on the same team, Aaron. Josh and Patrick aren’t gonna get any. So, you ready?”

The final score ended up being 7 to 2, but did Brady’s trash talk work? Watch and find out.

Several NFL fans thought they had the perfect comeback for Brady’s trash talk about wide receivers.

The last time Tom Brady and Aaron Rodgers participated in The Match they were opponents. Brady was paired up with Phil Mickelson while Rodgers teamed up with Bryson DeChambeau.

DeChambeau and Rodgers won the match 3 and 2.

Hopefully, after The Match, the next sports challenge Tom Brady participates in will involve LeBron James and some hockey pucks.