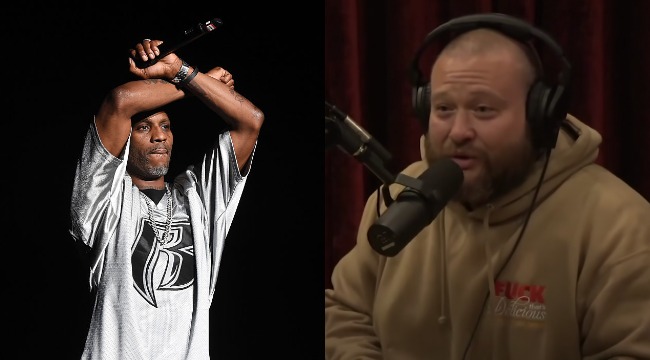 For all of you sex havers who are expecting a pandemic baby in the coming months, allow DMX to be your midwife. No need for an epidural when the bark of Ruff Ryder’s Anthem pops off.

New dad Action Bronson can attest, and during his recent appearance on The Joe Rogan Experience, the rapper and television personality told a story he regrets not being about to tell X himself.

Bronson explained that his wife was in labor for 18 hours during the birth of their child. During that rough stretch, the couple incorporated a “mothafucking Peruvian flute” to add atmosphere and assist in the birth. After 17 torturous passed and his shy son refused to introduce himself to the world, doctors claimed they may have to perform a C-section, to which Bronson responded “No fucking way.” So, he switched up the vibe in a big way.

“I played DMX. ‘stop, drop,’” Bronson explained to Rogan, and transcribed by Complex. “That motherfucker jumped out of her! I swear on everything, it’s on camera. It’s on film, as soon as the Peruvian flute music stopped, DMX came on, he heard the [barking] and he jumped out.”

The world needs to be introduced to that footage, as long as there is we can edit around the whole Human Exiting A Vagina part.

Even in death, X is contributing to life.