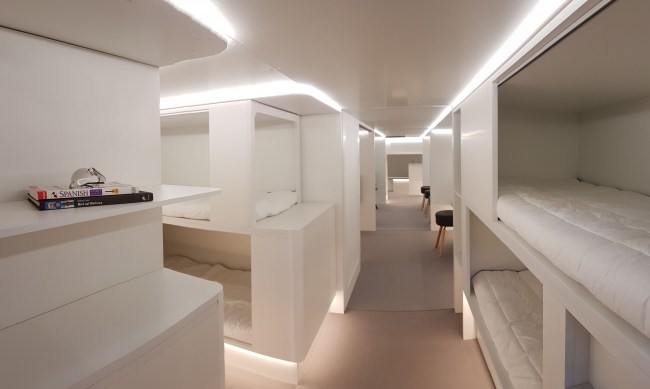 Back in January, I got hit with the worst travel circumstances imaginable. I had food poisoning that was destroying me from the inside. My flight from Portugal to Boston was delayed by 5 hours so I was forced to deal with it in the airport *until* I got on the plane and had been randomly assigned a middle seat because TAP Portugal wanted to charge for seat selection. Needless to say, by the end of that flight experience, I was ready to talk to anyone who would listen about how shitty international travel can be when you fly in coach (like I do)…But it doesn’t have to be that way.

We’re living in an era where airlines are becoming more restrictive by the day. A handful of domestic airlines are charging/going to start charging for carry-on bags. But Airbus wants to make flying more bearable. They’ve teamed up with Zodiac Aerospace to create designs that would put comfy/cozy beds in the cargo holds of their A330 and A350 XWB planes.

Together, Airbus and Zodiac Aerospace are designing lower deck modules that would put comfortable spaces into the cargo holds of the Airbus planes built for long-distance travel. Here are some mockups of those spaces:

Airbus announced their partnership with Zodiac Aerospace and the initiative to make flying more bearable in a press release:

Airbus and Zodiac Aerospace have partnered to develop and market lower-deck modules with passenger sleeping berths. The modules, which would fit inside the aircraft’s cargo compartments, offer new opportunities for additional services to passengers, improving their experience while enabling airlines to differentiate and add value for their commercial operations. The new passenger modules will be easily interchangeable with regular cargo containers during a typical turnaround if required. Moreover, the aircraft’s cargo floor and cargo loading system will not be affected at all, as the passenger module will sit directly on it.
Geoff Pinner, Head of Airbus Cabin & Cargo Programme said: “This approach to commercial air travel is a step change towards passenger comfort. We have already received very positive feedback from several airlines on our first mock-ups. We are pleased to partner with Zodiac Aerospace on this project which will introduce a new passenger experience and add value for airlines.” (via)

It’s pretty remarkable that it’s news that a large airplane manufacturer is trying to make flying more pleasant for passengers instead of an airline company trying to restrict comfort even further. Because that’s the only news we ever hear about. Well, it’s either a company is charging more for less or it’s news like 60 Minutes‘ report last night that found 100 mechanical problems on Allegiant Air from January 2016 to October 2017.

As passengers, we NEVER get good news when it comes to flying. It feels weird. And I can’t help but assume these sleeping cabins will be more expensive than First Class and compeltely cost prohibitive but I don’t want to be too pessimistic. This is still a step in the right direction.