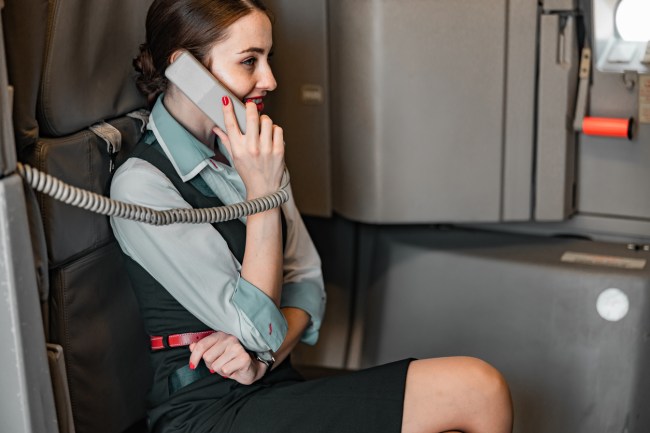 Many people will ask, “What do the sounds on an airplane mean?” In a viral TikTok video, a flight attendant revealed what the secret meaning of the ding and chime sounds on airplanes mean.

You’ll hear a number of ding and chime sounds during a flight, but what do they mean? Flight attendant Tommy Cimato used a TikTok video as an explainer to inform flyers on what the noises are during flights.

A single tone means that an air travel passenger is requesting assistance via the “call” button above the seat.

RELATED: Here’s Why The Front Of Engines On Airplanes Are Unpainted

Then there is the noise that no one wants to hear when they are flying. If there are three tones, that means that there is an emergency during the flight.

RELATED: This Is Why Airplane Windows Have Tiny Holes

Qantas Airlines noted in a guide to the coded tones that the flight crew uses to communicate with each other, “Triple chime LO-LO: Priority message from the captain or other crew members which could be letting them know there may be turbulence ahead, so they should start putting away the meal carts and be ready in case the fasten seat belt sign comes on.”

“On our Airbus aircraft you’ll hear the ‘boing’ sound shortly after take-off – this sound lets crew know that the landing gear is being retracted,” the airline explained. “The second boing is usually when the seat belt sign is switched off.”

You may also hear some commercial aviation jargon that you are not familiar with. Once the airplane starts to depart the gate, the lead flight attendant will say over the loudspeaker, “Cabin Crew – Arm doors and cross-check.”

The Ask The Pilot website explains, “The intent is to verify disarming of the emergency escape slides attached to the doors. When armed, a slide will automatically deploy the instant its door is opened. Disarmed, it needs to be deployed manually. On departure, the slides are armed to facilitate an emergency evacuation. Upon docking, they’re disarmed to keep them from billowing into the boarding tunnel or onto the apron during servicing.”

RELATED: Here’s Why We Board Airplanes From The Left Side