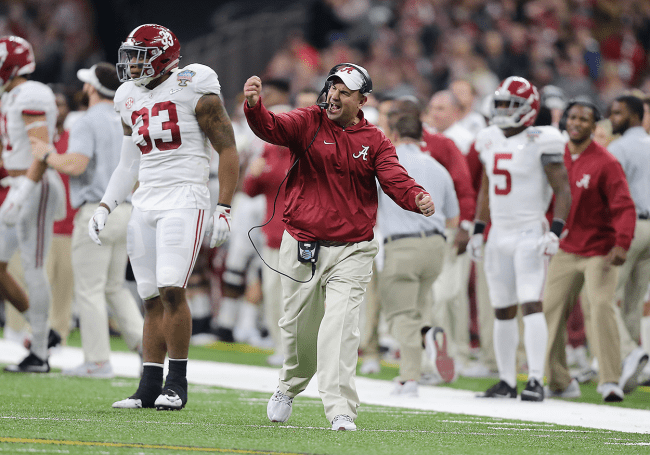 Jeremy Pruitt has five national championships to his name and all but one of them came as part of the Crimson Tide staff. The 48-year-old, who most recently served as a defensive assistant with the Giants after being fired as the head coach of Tennessee, had two stints with the Alabama program.

During his time as the defensive coordinator at Alabama in 2016 and 2017, the Crimson Tide won the final BCS National Championship. Pruitt then took the job at Tennessee.

In a recent interview with DawgNation’s Mike Griffith, Pruitt opened up on what meetings look like with Nick Saban. He said that honesty and efficiency comes first.

“I think when you work for Coach Saban, he’s really about efficiency,” Pruitt said. “One way to be that way as a coaching staff is you’ve got to be honest with each other. If you don’t agree with something, you’ve got to tell the other person, ‘I don’t agree with it’ or ‘I like that.’ … I’ve been on the bad end when Coach Saban has corrected me, but the great thing about it [is] it’s a correction. It’s no different than a player.”

At the end of the day, Pruitt says that Saban and Kirby Smart’s success stems from open conversation. Neither coach shies away from confrontation or controversy.

“He’s just being efficient, and if you don’t agree with something — and Kirby’s the same way — you talk about it. I think it’s why both of them are very successful.”

While honesty is undeniably a good thing, being on the “bad end” of a Saban correction does not sound like a fun time. We’ve seen Saban chew out his players in the middle of a blowout on multiple occasions and it looks brutal. Imagine what it’s like behind closed doors. Yikes.