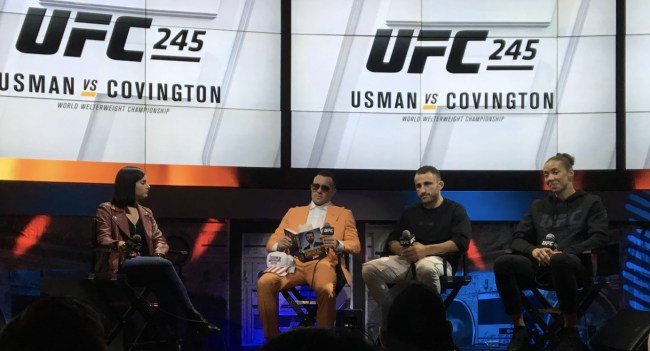 Presented in partnership with UFC 245 on ESPN+

What’s the point of tuning in to a fight if you already know who is going to win?

Sure, there’s always the anticipation of a brutal knockout or a wild submission, but evenly matched fights, where either fighter has a legitimate path to victory, command a certain special attention and intrigue.

Fight fans will go to every length to hypothesize how a challenger can unseat champion, making a case for the underdog to top a heavy favorite. It’s the type of analysis and logic many are contemplating at the moment, as challengers Alexander Volkanovski and Germain de Randamie prepare for their title fights against champions Max Holloway and Amanda Nunes on the UFC 245 Pay Per View main card on ESPN+.

Those who live outside the fight bubble will quickly see that Holloway and Nunes are the two most tenured current UFC champions. They will see stats that say that Holloway is undefeated at featherweight since 2013, and that Nunes is going for her tenth straight win. Those numbers will lead many to believe that the champions should roll through the competition on December 14 at the T-Mobile Arena in Las Vegas, but numbers are often deceiving, especially in a sport like mixed martial arts, where the math never quite adds up.

See, for his part, Volkanovski has some pretty exceptional numbers. He’s also undefeated since mid-2013, although back then, Volkanovski fought at welterweight (170 pounds), where he still had knockout power. In total, it’s been 17-straight wins for Volkanovski, including seven wins inside the Octagon.

De Randamie, who once briefly held the UFC featherweight title, also has some rather impressive numbers. In addition to recording the fastest knockout in UFC women’s bantamweight history, de Randamie has also gone undefeated since 2013. Even Nunes has lost more recently than that.

While UFC featherweight champion Max Holloway is known for his nonstop attacks, which include multi-punch and kick combinations and some seriously high level striking from all angles, Alexander Volkanovski combines wrestling and boxing to pressure opponents against the cage, where he is known to unload combos.

And where Holloway is a volume puncher who can strip away his opponent’s will to compete with the constant barrage of blows, Volkanovski is a power puncher who picks his shots, often using feints to the head to set up the body work.

With a considerable power advantage, Volkanovski has the ability to finish the fight at any moment, but first he’ll have to catch Holloway, which is something that 13 consecutive featherweights have failed to do.

For the last five years, UFC bantamweight champion Amanda Nunes has used her size and power to overwhelm and dominate some of the biggest names in mixed martial arts. She’s knocked out legends and hall of famers and submitted former champions, but during her current title reign, Nunes has yet to face a taller and longer fighter like Germaine de Randamie.

Of course, that statement is a bit controversial because Nunes has already defeated de Randamie once, back in 2013, but that was before she was the champion.

Now, looking at de Randamie’s style and how she matches up with Nunes, it’s essential for the challenger to use her length and fight on the outside. De Randamie will need to land kicks early and often to keep Nunes at a distance before moving in with her hands. And, considering Nunes’ ability to pressure inside with strikes of her own, it’s a very limited window for de Randamie, but a window nonetheless.

In the world of sports betting, both Volkanovski and de Randamie would be labeled as “live dogs.” They’re dangerous underdogs with legitimate paths to victory, and thus, the betting lines are reflective of the matchups.

With Volkanovski currently listed as +150 on many betting lines, he’s really not much of an underdog, mostly because of his power. Think about it, Max Holloway will need to evade the knockout for an entire 25 minute fight.

For de Randamie, the odds are less favorable. She’s listed at +240, with Nunes listed as a near 3-to-1 favorite.

Still, this is the fight game, and anything can happen, so tune in to the UFC 245 main card to see if these live dogs will bark.