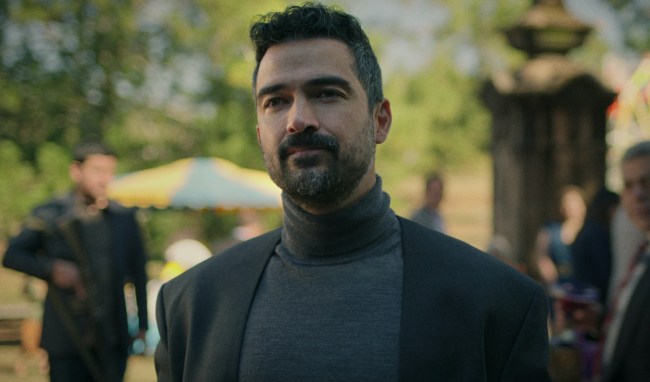 As if Ozark wasn’t already one of the best shows on television, the series has leaped to another level in season four thanks to the addition of Alfonso Herrera’s unpredictable firecracker druglord Javi Elizonndro, the nephew of Navarro cartel leader Omar.

Editor’s Note: this article containers spoilers for Season Four, Part One of Ozark.

During a particularly intense scene in the final episode of Season Four, Part One, Herrera’s Javi springs an attack on Marty Byrde by ambushing him at the home of attorney Jim Rattelsdorf. The scene requires a significant amount of physicality from Herrera — whose Javi really beats up on Jason Bateman’s Marty — so we couldn’t help but ask what it was like filming that scene considering that Herrera was, essentially, beating up on his boss.

“What I enjoyed a lot about Jason is that his talent is equivalent to his generosity. He is incredibly generous on set, and not just with the cast, but with every single member of the crew. And if you have a number one that sets the tone like that, it’s very easy to work with someone like that,” Herrera told us.

“And specifically that scene, that episode was directed by Robin Wright. So, it was amazing to see that collaboration between Jason and Robin and us working the scene together. What I really admire about Jason was he was there and he was physically there and sometimes there was a double, and he said ‘No, no, no, I’m going to do it myself.’ I was trying to be very careful because of the physicality of the scene but he was like, ‘Don’t worry, man. I have protection. You’re good, you’re cool. Let’s just try to make it the best it can be.’ It was great. Specifically that scene, it was choreographed really well, and Jason was Jason Bateman. He was amazing.”

The first four seasons of Ozark are currently streaming on Netflix. As Herrera teased, Part Two has already been filmed and will debut on the streaming service later this year.