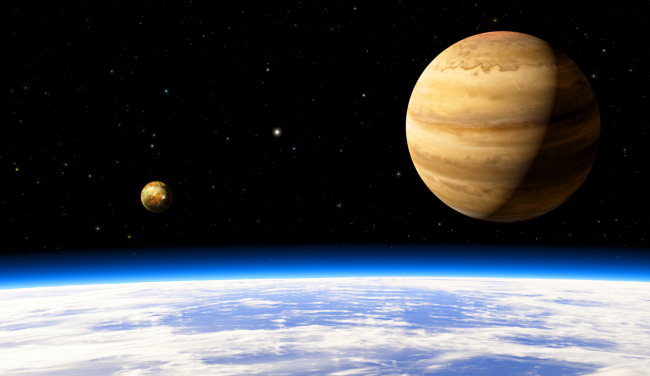 Scientists have long been searching for signs of alien life and locations where it might be found. As technology has advanced, the search has been made easier and has given researchers better guidance when it comes to where to look.

Now, in a new study published on Nature.com, scientists believe that they may have pinpointed one of those locations: Jupiter’s moon Europa.

The reason for their optimism is that they have discovered that shallow pockets of water near the surface of Europa are similar to the type of geometrical formations found in northwest Greenland here on Earth.

“Liquid water near to the surface of the ice shell is a really provocative and promising place to imagine life having a shot,” said senior author Dustin Schroeder, an associate professor of geophysics at Stanford University. “The idea that we could find a signature that would suggest a promising pocket of water like this might exist, I think, is very exciting.”

Schroeder added, “Because it is closer to the surface, where you get interesting chemicals from space, other moons and the volcanoes of Io, there is a possibility life has a shot if there are pockets of water in the shell. If the mechanism we see in Greenland is how these things happen on Europa, it suggests there is water everywhere.”

If ice ridges on Jupiter’s moon Europa formed the same way they did in Greenland, alien life may be present

Riley Culberg, a PhD candidate and geophysicist at Stanford, states, “On the Greenland ice sheet there is this little double ridge feature that looks almost exactly like the ones we see on the surface of Jupiter’s moon Europa. And the reason it’s exciting to have this analogue feature in Greenland is that we’ve been trying to figure out what makes double ridges on Europa for about 20 years.”

Related: Three Lakes Found Beneath Surface Of Mars Could Be Home To Alien Life On The Red Planet

Writing in Nature Communications, the researchers describe how Greenland’s double ice ridges, which are about 50 times smaller than those on Europa, formed when shallow pools of subsurface water froze and fractured the surface time and time again, steadily driving up the twin ridges. “It’s like when you put a can of soda in the freezer and it explodes. It’s that kind of pressure that pushes up the ridges on the surface,” said Culberg.

In Greenland, water drains into the underground pockets from surface lakes, but on Europa the scientists suspect liquid water is forced up towards the surface from the underlying ocean through fractures in the ice shell.

This movement of water could help circulate chemicals necessary for life down into Europa’s ocean, they add.

Related: Liquid Ocean Beneath Pluto’s Icy Surface Could Be Home To Alien Life, According To New Research

One of the main obstacles to confirming theories such as this is obviously the ability to acquire data directly from the source.

However, NASA’s Europa Clipper mission, scheduled for launch in 2024, “will conduct detailed reconnaissance of Jupiter’s moon Europa and investigate whether the icy moon could have conditions suitable for life.”