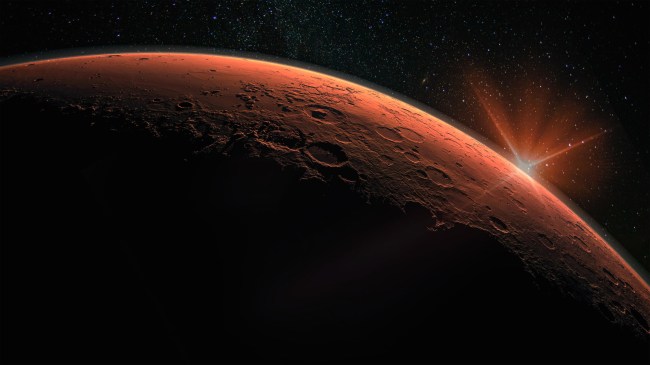 While signs of life may have be found on Venus recently in the form of an alien bio-signature discovered by astronomers on Earth’s “twin,” we still can’t sleep on Mars.

After all, it was just a couple of months ago that landmark new research revealed possible evidence that alien life may exist under ancient ice sheets on Mars.

The logic there was that these ice sheets could possibly have offered protection from the solar radiation pelting the surface of Mars allowing alien life to have survived, possibly in the liquid underneath the sheets.

Fast forward to this week and we’ve got even more promising news about alien life and the red planet.

A new study by Italian scientists, published this week in the journal Nature Astronomy, has confirmed the existence of a group of underground lakes located 4,600 feet beneath ice near the south pole of Mars.

Evidence surrounding the existence of these bodies of water was first discovered in 2018 using data from a radar sounder on the European Space Agency’s Mars Express orbiter.

Nature.com reports that if confirmed, this would be the first body of liquid water ever detected on Mars and as such, it could be a possible habitat for alien life.

“We identified the same body of water, but we also found three other bodies of water around the main one,” says geophysicist Elena Pettinelli of Roma Tre University in Italy, one of the study’s co-authors. “It’s a complex system.”

On the surface of Mars, the low pressure that results from the planet’s lack of a substantial atmosphere makes liquid water impossible. But scientists have long thought that there could be water trapped under Mars’s surface, perhaps a remnant of when the planet once had seas and lakes billions of years ago. If such reservoirs exist, they could be potential habitats for Martian life. On Earth, life is able to survive in subglacial lakes in places such as Antarctica.

But the amount of salt present could pose problems. It’s thought that any underground lakes on Mars must have a reasonably high salt content for the water to remain liquid. Although this far beneath the surface there might be a small amount of heat from the interior of Mars, this alone would not be enough to melt the ice into water. “From a thermal point of view, it has to be salty,” says Pettinelli.

Priscu also points out, “There’s not much active life in these briny pools in Antarctica. They’re just pickled. And that might be the case [on Mars].”

Still, if the presence of life, active or not, is discovered in one of these bodies of water on Mars it would be a monumental discovery.

“The possibility of extended hypersaline water bodies on Mars is particularly exciting because of the potential for the existence of microbial life,” the study explained. “Future missions to Mars should target this region to acquire experimental data in relation to the basal hydrologic system, its chemistry, and traces of astrobiological activity.”

The key here is the fact that salt lowers the freezing point of water so despite temperatures of the water on Mars estimated to be minus-90.67 degrees Fahrenheit, the massive amounts of salt may have actually kept the liquid warmer, allowing for life to survive, possibly even to this very day.

“These lakes have probably existed for much of Mars’ history,” said planetary scientist Roberto Orosei of the National Institute for Astrophysics in Italy, Science Alert reports.

“For this reason, they could still retain traces of any life forms that could have evolved when Mars had a dense atmosphere, a milder climate and the presence of liquid water on the surface, similar to the early Earth.”

Now we just have to figure out how to get some smart people up there to check it out personally without killing them.