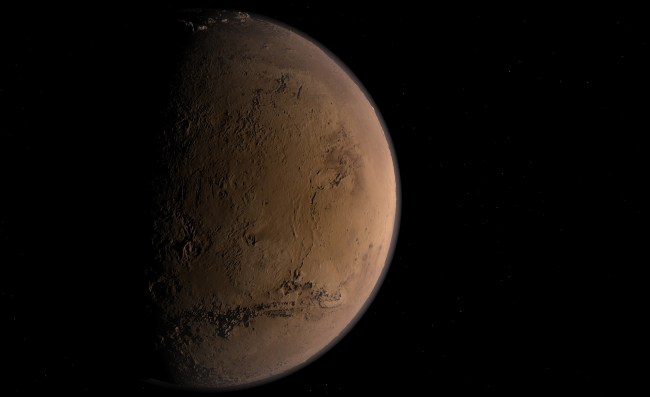 SpaceX founder and CEO Elon Musk, the guy who recently shared the wonderful prediciton that artificial intelligence will more than likely overtake humans within the next five years, is back with some more great news about the future.

Musk, who is hellbent on colonizing Mars and has already sold tickets to the International Space Station for $55 million, said during the virtual “Humans to Mars” conference on Monday there’s a “good chance” that the first settlers on Mars will die.

Despite that minor concern, Musk is still full steam ahead on building a self-sustaining city on Mars by the year 2050.

Related: Elon Musk Is Working On A Chip That Will Let You Stream Music Directly Into Your Brain

In the near term, SpaceX plans for Starship to fly missions to low Earth orbit and then to the Moon. But Mars remains Musk’s long-term goal. The company will reach the red planet “given enough time,” Musk said, but “the question is: How long it will it take us?”

“I want to emphasize that this is a very hard and dangerous, difficult thing, not for the faint of heart,” he added. “Good chance you’ll die, it’s going to be tough going, but it will be pretty glorious if it works out.”

Related: Elon Musk Is Planning On Having Cyborgs Living Side-By-Side With Humans In The Near Future

Musk also discussed SpaceX’s Starship, the craft that he plans to use to transport up to 100 passengers or 100 tons of cargo to the red planet. He just needs to make around a thousand of them.

As the planets align only once every two years

So it will take about 20 years to transfer a million tons to Mars Base Alpha, which is hopefully enough to make it sustainable

“We’re making good progress,” Musk revealed on Monday. “The thing that really impedes progress on Starship is the production system… A year ago there was nothing there and now we’ve got quite a lot of production capability. So we’re rapidly making more and more ships.”

But first, he added, they need to “automatically deliver satellites and do hundreds of missions with satellites before we put people on board.”

By the way, where exactly does one store 100 giant spaceships? Eh, I’m sure he’ll figure it out. Then he’ll work on that whole death thing.