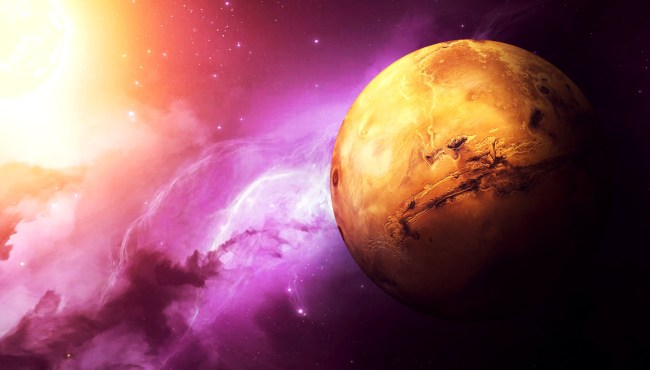 It was just a few weeks ago that scientists, after conducting new research, stated that a liquid ocean beneath Pluto’s icy surface could be home to alien life.

Now comes news from another set of scientists that Mars – the planet many have long believed was or is currently home to alien life – may provide us with concrete proof of alien existence.

According to a new study by a group of University of British Columbia researchers published in the journal Nature Geoscience, the numerous channels and valleys carved into the surface of Mars may not have been caused by flowing rivers, but rather by ancient sheets of ice.

Why is that distinction important?

These ice sheets could possibly have offered protection from the solar radiation pelting the surface of Mars allowing alien life to have survived, possibly in the liquid underneath the ice sheets.

“For the last 40 years, since Mars’s valleys were first discovered, the assumption was that rivers once flowed on Mars, eroding and originating all of these valleys,” stated lead author Anna Grau Galofre. “But there are hundreds of valleys on Mars, and they look very different from each other. If you look at Earth from a satellite you see a lot of valleys: some of them made by rivers, some made by glaciers, some made by other processes, and each type has a distinctive shape. Mars is similar, in that valleys look very different from each other, suggesting that many processes were at play to carve them.”

Their research involved the comparing of over 10,000 Martian valleys to the channels formed underneath glaciers of the Canadian Arctic Archipelago using a novel algorithm. What they discovered is that they are extremely similar.

“These results are the first evidence for extensive subglacial erosion driven by channelized meltwater drainage beneath an ancient ice sheet on Mars,” says co-author Mark Jellinek, professor in UBC’s department of earth, ocean and atmospheric sciences. “The findings demonstrate that only a fraction of valley networks match patterns typical of surface water erosion, which is in marked contrast to the conventional view. Using the geomorphology of Mars’ surface to rigorously reconstruct the character and evolution of the planet in a statistically meaningful way is, frankly, revolutionary.”

A press release discussing the study states, “These environments would also support better survival conditions for possible ancient life on Mars. A sheet of ice would lend more protection and stability of underlying water, as well as providing shelter from solar radiation in the absence of a magnetic field—something Mars once had, but which disappeared billions of years ago.”

Can you feel it, folks? We’re getting closer and closer to finding out the truth.