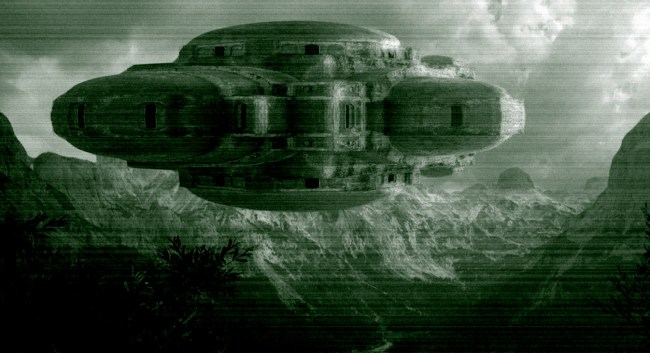 This discovery of what appears to be a UFO crash site by a dog walker from Meddon in Devon, England on Monday got me to thinking. What if the reason no civilian has ever been able to record one of these aliens (or time traveling humans) or their crafts (which could be traveling from a parallel world) is because they possess the kind of advanced technology that allows them to wipe any memory humans may have of seeing them from existence, a la Men in Black?

Food for thought because as Ben Landricombe, the man walking the dogs told Cornwall Live, “We took the dog for a walk and it felt eerie and we walked about a mile and came across this. We took the pictures and then felt someone was watching us and heard weird sounds so we ran back to our camper. Something strange about this place.”

Landricombe also stated that in addition to the flattened vegetation, he also heard what he described as screams and that he will not be returning to the area as a result of this discovery.

“Something has definitely crashed here – look at this,” Landricombe says on video. “Boom – weird. Massive gap in the woods, all the trees bent, trees fallen over, massive hole in the woods. Aliens.”

You can clearly see the still living trees laying sideways and a circular wall of trees still growing straight and normal on the edges.

Very odd, and yes this could be a landing place for a UFO, but it could also be the exact location of a tunnel opening up from an underground base 5km below the surface.

Dirt and rock are easy for aliens to open and close with their advanced tech, as easily as a human opens and closes a zip lock bag.

100% proof of alien activity in the area.

Landricombe isn’t the only dog walker in the U.K. to run into a UFO situation recently.

A woman in Glasgow was out walking her dog back in November when she “saw these weird lights circling around and joining up in the sky above my house. I was really freaked out by it.”

Then, just a month ago, another dog walker in Perranporth Beach captured “a series of UFO-like flashing lights in the sky” on video despite the fact that there was no “sound at the time and no helicopters or planes visible in the sky.”

Sooner or later these one of these aliens (or time traveling humans) are going to slip up and a random civilian will actually catch them in the act. Then, those in authority will have to start answering some serious questions.